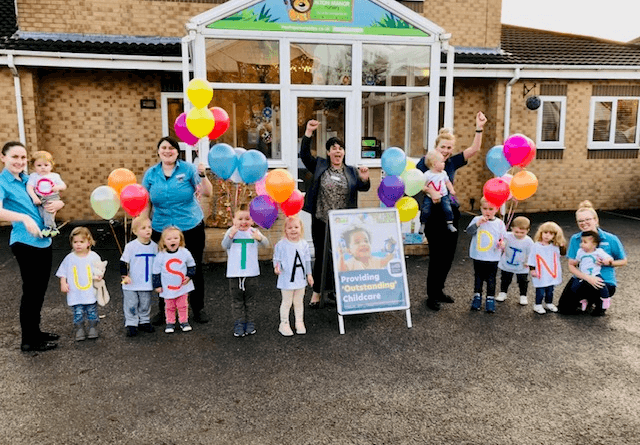 Alton Manor Nursery in Belper is celebrating after winning top prize at a national awards ceremony.

A total of 12 awards were handed out during the ceremony, with Alton Manor Nursery on Gregory’s Way beating off stiff competition and taking the highly coveted Nursery Team of the Year award. The team at Alton Manor were nominated for the award due to their outstanding commitment to childcare.

The team were also shortlisted for another award for Best Presented Nursery on the night , as well as receiving a award for their outstanding grading issued by Ofsted in 2018. Stefanie Reardon, Nursery Manager says “This was a fantastic evening and to come away with these awards is just testament to the hard work and dedication everyone at Alton Manor has to giving every child the best start in life, I am so proud of the nursery”

Cheryl Creaser, CEO at Busy Bees, said: “The competition between our finalists was fierce this year, but one application stood out from the rest. The Alton Manor team are true ambassadors and uphold our core values, vision and mission in everything they do. Since transitioning to Busy Bees, the team have really embraced the change and supported one another. Together the team create a nursery that is truly magical and child centred, and it is an absolute pleasure to award all the staff at Alton Manor with Team of the Year.”

Stefanie Reardon, Nursery Manager at Alton Manor, said: “We are thrilled to have won Team of the Year at Busy Bees national awards. Every member of staff at Alton Manor has worked incredibly hard over the last year and it’s great to see the results pay off. We are driven to achieve the highest quality childcare and create an environment where children can grow and develop. After being awarded ‘Outstanding’ by Ofsted in October 2018, this award from Busy Bees really is the icing on the cake. I’m so proud of the whole team for their hard work and commitment, and I can’t wait to see what the next year brings.”