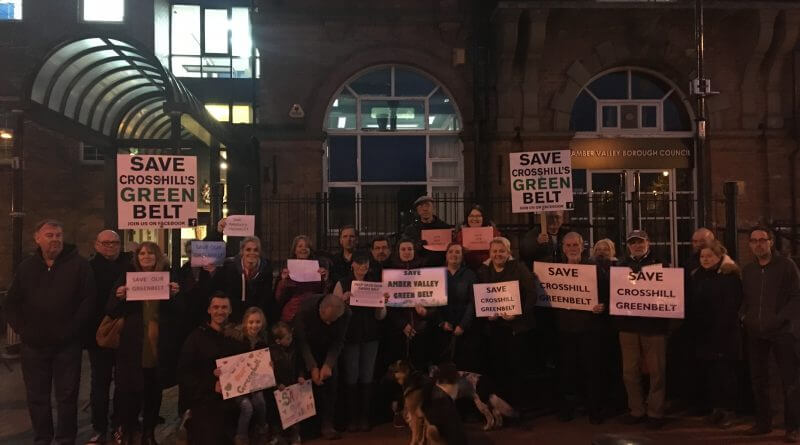 Deleting land from the protected green belt in Amber Valley to make way for thousands of houses will take the borough back 25 years, residents fear.

Around 40 residents gathered outside Amber Valley Borough Council’s Ripley headquarters on Wednesday 27th March 2019, to protest against the plans – which are now out to consultation.

This comes just weeks after the authority voted to delete 14 chunks of land from the green belt to make way for 2,100 more houses by 2028.  The vote passed by the slimmest of margins on Monday 4th March 2019, by 22 votes for, 21 against, and one abstention.

These areas of land are set to be added into the borough council’s Local Plan, a blueprint for future development.  A government planning inspector will have the final say on whether the plan will be approved.

Bob King, from Upper Marehay, was among the protesters. He said:

British Coal have done a magnificent job with what they have done to many of our former open-cast mines.  A lot of these open-cast mines are now home to a lot of wildlife. What has been decided now is to rip it all up again, to take us back to 1995 when the mines were closing. Brilliant work has been done to bring these places back to nature and the council wants to rip it all to bits. On top of that, our towns and villages have their own communities, these people come from Crich, Marehay, Ironville and Duffield and that is their identity. If they merge all of these places together, which is what is going to happen, they’ll lose that identity.

There are lots of former miners in this area – with their ill health they need green open spaces to stop conditions from deteriorating. This land acts as a green lung for the surrounding urban area.

There are enough houses in Marehay already, there are enough problems as it is trying to get into the doctors, and the roads are already terrible with too much traffic.

Several residents from Crosshill in Ripley said that when they had attempted to get planning permission for very small scale projects, they had taken over a decade to be decided and were typically rejected because of the green belt – they wonder what has changed.

Traffic on some of our roads is already horrendous, you feel like your life is on the line. You can’t get in to see your doctor or dentist.

Some residents from Heage commented:

We can’t cope with any more houses, our roads can’t cope, our doctors can’t, our dentists can’t, our schools are already full. We feel that brownfield sites should be looked at first before green belt.

This comes in the same week as the Campaign to Protect Rural England claimed that there were enough vacant or disused brownfield sites to build more than one million houses.

However, a large chunk of land known as Bullsmoor, in Belper, is to be added into the green belt.

It had been at the centre of planning applications for houses and a factory expansion but these were rejected by the borough council and at appeal by government planners.

*Video recieved and use permitted via Local Democracy Reporting Service

One thought on “Protest to Save Green Belt”