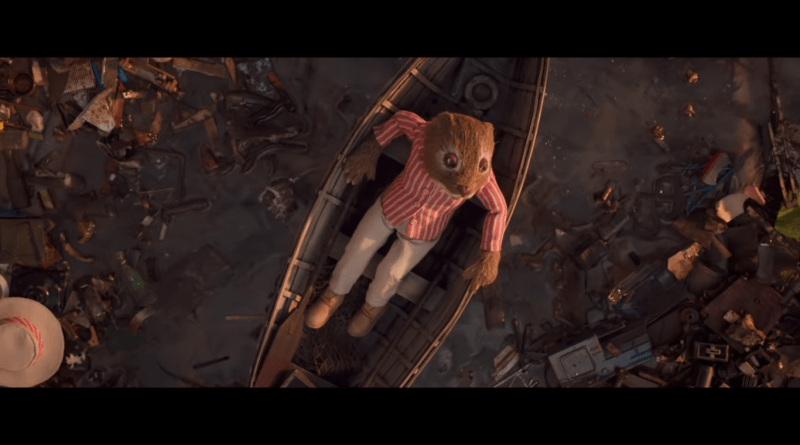 To call attention to what we humans have done to nature, Sir David Attenborough, Catherine Tate, Stephen Fry, Alison Steadman and Asim Chaudhry are all playing a part in a new campaign by The Wildlife Trusts (regional trusts, including Derbyshire, combined).

The stars all take on the roles of the characters from Kenneth Grahame’s beloved children’s book, The Wind in the Willows, and have lent the backing of their own voices to the cause, calling for us to help nature recover from the damage we have done, and to protect declining animal populations in what the Trusts are calling “a wilder future” for the UK.

These characters, who were our friends, as children, are shown dealing with the consequences of human impact on their natural environment, and the 21st century threats which they now face.

The film trailer shows how the lives of Badger, Ratty, Mole and Toad have been disrupted by roads, river pollution and intensive agriculture, with many animal habitats having been destroyed, and others broken up. Toad hangs a picture of a puffin, entangled in plastic beer can rings, on the wall in Toad Hall. “Farewell old friend” he says.

Asim Chaudhry, comedian and actor, who plays Toad, said:
“Like many people in the UK, I’m shocked by the decline in our wildlife – but this film shows we can reverse this if we all take action now.”

The terrifying and upsetting message is that in the 111 years since Kenneth Grahame wrote The Wind in the Willows, many of the UK’s wild places, along with the plants and animals that depend on them, have been lost.

As David Attenborough states in the film,

“Since we first met Badger and friends, the UK has become one of the most nature depleted places on the planet.”

Over the past ten years there have been numerous reports and studies documenting wildlife declines in the UK. The main problems for wildlife are:

Stephanie Hilborne, CEO of The Wildlife Trusts, said:
“We are a nation of nature-lovers, yet we live in one of the most nature-depleted countries in the world. If we want to put nature into recovery we have to create a mass movement of people calling for change. Our film is a sad version of Wind in the Willows – showing how Ratty and Toad have hit the buffers – but it ends with a message of real hope. It’s not too late to create strong laws which will help our wildlife make a comeback – and it’s not too late to establish a Nature Recovery Network which will enable us to plan a wilder future.”

The Wildlife Trusts hope that looking at The Wind in the Willows in a modern setting will inspire people to help by nature by:

Message from Sir David Attenborough, The Wind in the Willows Narrator and President Emeritus of The Wildlife Trusts

It is desperately sad that so much of our country’s wildlife has been lost since Kenneth Grahame wrote his wonderful book The Wind in the Willows.  Of all the characters in the book it is hard to know whose descendants have suffered the most. Water Voles, Toads and Badger’s friends in the book, Hedgehogs, have all seen catastrophic declines.

Ratty was a Water Vole and these animals can’t burrow into river banks covered with sheets of metal. Toads need ponds and wet areas to lay their eggs.  Hedgehogs must roam miles to feed at night but often hit barriers and struggle to find the messy piles of leaves they need for shelter. None of these creatures can cope with road traffic because they did not evolve to recognise a car as dangerous.

We have damaged our rivers, built too many roads and lost too many ponds and meadows.  All of this has happened because our systems and laws that should be keeping nature healthy are failing, and we are losing touch with wildlife.  Everything is becoming disconnected.

The Wildlife Trusts have worked tirelessly to slow wildlife’s decline and to save our remaining wild places.  Without The Wildlife Trusts our country would be the poorer.  But there is much more to be done.  This country of nature lovers needs to give its wildlife every chance to survive, thrive and expand its range.

I am backing The Wildlife Trusts’ campaign to rally people to secure a ‘wilder future’ by restoring large areas of wildlife habitat, in city and country.  What we create may not look exactly like the countryside that Kenneth Grahame drew such inspiration from, but our wildlife won’t mind just so long as it has the places it needs to live and thrive.

As a society we know how to put meanders back into straightened rivers and how to build bridges for wildlife. We know which wild places we should be protecting and expanding.  But we need ambitious new laws to ensure we do this, laws that ensure we map out nature’s recovery.

Meanwhile we can all make a practical difference.  If you have a window sill or balcony you can put up bird feeders or plant pots of wildflowers.  If you have a garden it is easy to dig a small pond or make holes in your fence for hedgehogs to wander through. It is not too difficult to take up paving slabs to let plants grow to feed our bees.

Together we can make the next chapter for wildlife a happier one. Join us to put nature into recovery.

Stephen Fry, President of the Great Fen, Wildlife Trust Bedfordshire, Cambridgeshire and Northamptonshire, who plays Badger, said:  “I’ve acted in and narrated Wind in the Willows in the past but this version is different – it really, really matters. I adore what’s left of Britain’s wild and precious places and I’m a passionate supporter of my local Wildlife Trust which is restoring a huge part of the fens for nature. We all need to get behind The Wildlife Trusts, rise up and call for a wilder future – otherwise it’ll be too late to save Toad, Ratty and all the residents of the riverbank and beyond.”

Alison Steadman, Olivier Award winner & ambassador for London Wildlife Trust, who plays Mole, said:  “The decline in UK habitats since Kenneth Grahame’s wonderful tale is truly shocking. Millions of people in the UK profess a love of wildlife and we need everyone to be taking action to bring about nature’s recovery. I wanted to take part in this film to help inspire people to get involved and bring our nature back.”

When: 30th March 2019
Where: Sadler Gate, Derby.
Time: 11am – 9pm
Why: This event is happening to raise awareness of the Wilder Future campaign. <
What’s happening:

Artists, performers and events will be happening alongside one another throughout the day in the space. These include:

At 7pm, there will be a Green Carpet event. This will be an ecological take on a traditional red carpet premiere. There will be a pop up cinema with a showing of the Wilder Future campaign video (The Wind in the Willows) with popcorn! There will be several showings of the film throughout the evening until 9pm.

Get involved:  Derbyshire Wildlife Trust is creating a space for conversation about nature’s future and how we all play a part.
They’ll be collecting the pledges that people have been inspired to make for a Wilder Future, what people want their Wilder Future to look like and how they’ve connected with nature on the day thanks to this event.
Pledge & conversation spots:  Activities will focus on sparking interest and conversations with passers-by with a number of ‘conversation points’ where DWT staff and volunteers can talk about the Wilder Derbyshire campaign and how to support it.
Street artists will be creating artwork to interact with the public, images from the Wilder Derbyshire brochure, and the campaign hero advert will be projected onto QUAD, and sculptures of wildlife and planters will be placed around the area.
Face painters and actors will engage with families to discuss local wildlife and the small changes families can make in their gardens, schools etc.
Wall of Change If the brand new Derbyshire Wildlife Trust Charity Shop is ready for the 30th, they will have a Wall of Change inside where people can write a pledge for how they will support the Wilder Derbyshire campaign and their pledge for wildlife. An illustrator will create a pledge board of ideas.
More information
Visit www.derbyshirewildlifetrust.org.uk/wilder-future