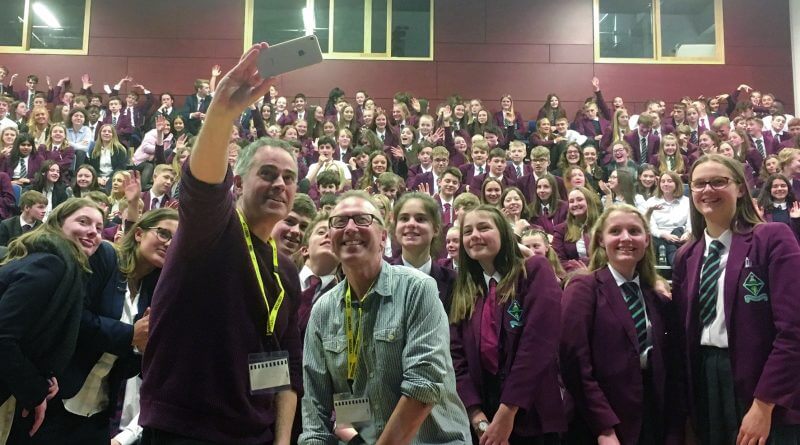 Students from The Ecclesbourne School, at Duffield, bombarded the Co-leader of the Green Party, Jonathan Bartley, with questions when he visited the school this week.

The 330 young people, aged from 12-18, were so keen to hear his views on environmental issues, electoral reform, wealth distribution, migration and even Brexit that the Head Teacher James McNamara agreed to extend the hour-long debate so more questions could be asked.

Jonathan had been invited to Duffield by the Amber Valley Green Party and was introduced to the students by Dave Wells, who is standing for election to Amber Valley Borough Council in Duffield on May 2.

“It was brilliant to see the young people in Duffield so engaged. They asked such insightful questions and were clearly passionate about many issues,” said Dave.

“It was especially interesting to hear about the efforts the pupils are making to cut the use of single use plastic in the provision of their own school meals,” he added.

The students told Jonathan and Dave that they are planning to swap plastic cutlery for bamboo and have already ditched polystyrene food containers in favour of cardboard.

Jonathan opened the debate by apologising to the students, saying that he was ashamed that his generation had let them down. Referring to the School Strike For Climate campaign he told them young people were showing the leadership qualities they should have had from their government for the last 30 years.

“You are part of a really important movement. The Green Party will always encourage you to speak up and give you all the support you need,” he said.

“We need a radical system change and to reconfigure the very way we live. To bring about change it is important that you register to vote and then vote out of conviction for what you believe in,” he added.

In the evening Jonathan addressed Green Party supporters at a open meeting at the King’s Head pub in Duffield where he praised the Amber Valley Greens for their consistent hard work in the community.

“I am really excited because I believe Dave can get across the line and make history in Duffield and Amber Valley,” he said.

“When a Green Party candidate gets elected it is because they have earned it. It is what Dave is doing in the community that will win him support here. And when Greens get elected they can then make a real difference.”

Picture caption:  At the end of the debate Jonathan Bartley and Dave Wells took a “selfie” photograph with the cheering students.