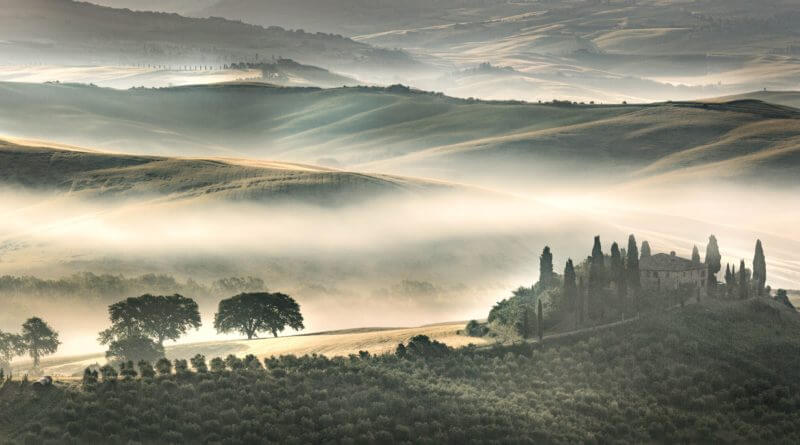 A mist-strewn Tuscany scene at dawn, by Milford-based photographer Ashley Franklin was awarded second place in the Society of Photographers’ Landscape Photographer of the Year Award 2018.

This prestigious award is the culmination of a year-long striving.  Members are invited to enter a single image in the Society’s monthly competition, with the Gold Award winners considered for nomination for the Photographer of the Year prize.

“The standards are always high so I was thrilled just to be one of three nominated,” said Ashley. “What’s more, entries come from all over the globe so it’s a truly international award.”

Ashley’s image “Belvedere Dawn” was captured on a May visit to the D’Orcia Valley in southern Tuscany. “For me, this area has the most sublime landscapes in Europe, with its lush, verdant rolling hills, lines of vines and sentinel cypress trees,” commented Ashley. “It’s even better mid-to-late May when the fields are filled with poppies and there is a good chance of capturing mist-strewn valleys at dawn. It’s a magical time.”

This is the fourth landscape award at the Societies of Photographers for Ashley; he has been a runner-up on two other occasions and won first prize in 2011.

Significantly, all of Ashley’s awarded images were taken in the same region and it inspired him to set up Under Tuscan Skies, a workshop for photographers in the D’Orcia Valley. Ashley’s first workshop last May – alongside Burton-based landscape photographer Wayne Brittle – was a great success.

Of the workshop, Ashley said, “All six of our photographers had a memorable week, and they, too, have gone on to win awards in the camera club world for the images they took during their trip.”

Following that workshop, Ashley arranged for the photographers to exhibit their work at Angelo’s, the Milford restaurant where Ashley displays his Tuscany pictures.

Ashley and Wayne already have four photographers booked for their 2019 workshop in May. “Being able to show my award-winning landscapes on my website has undoubtedly boosted interest” said Ashley.

“We have just two places to fill” added Ashley, “so I hope photographers will visit my website to see the marvellous images that can be captured in this glorious part of the world.”

To find out more about Ashley and Wayne’s Tuscany workshop, visit Ashley’s website: