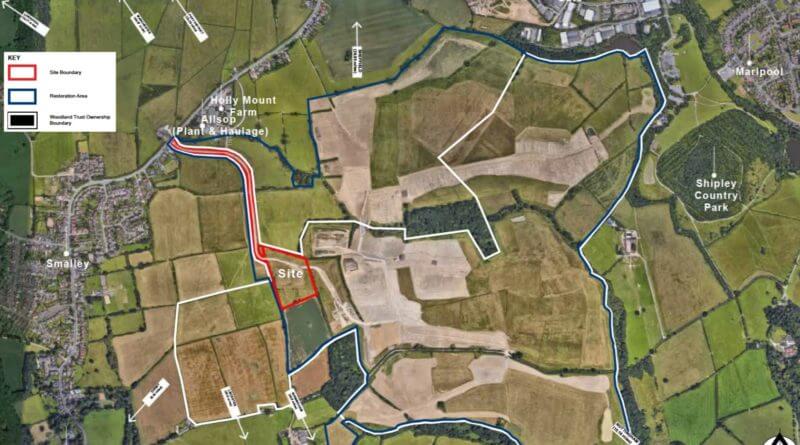 Ambitious plans to plant the UK’s first “young people’s forest” on a former coal mine near Heanor are set to take a leap forward.

The Woodland Trust announced its £5 million proposals for the 400-acre site, between Heanor and Smalley, in November.

It says that the first 250,000 trees will be ready to plant by autumn.

Now, the charity’s application to build a permanent 80-space car park and a grassy 160-space overflow car park is set for approval by Derbyshire County Council. It will make a decision on the proposals on Monday, February 4, with planning officers recommending that they are given the go-ahead.

The trust wants youngsters involved in every stage of the project, right down to the planting of the trees.

It has secured £500,000 to buy the first quarter of the site, owned by the Harworth Group. The charity says it needs £5 million to turn the site “into a community powerhouse”. It says that career training, practical workshops, bushcraft sessions and music festivals would take place at the site, when completed. These, it says, would provide the charity with the opportunity to engage directly with the local community and to encourage outdoor activities.

A statement from the charity, submitted with the application, reads: “It is the Woodland Trust’s aspiration to restore the estate back to its natural beauty, helping to transform the land to diverse native woodland whilst promoting and improving access to the wider estate. As part of the restoration process the car park will act as a platform to encourage more people to experience the “great outdoors”. The land at the former Lodge House Surface Mine, Smalley, is a unique opportunity for the Woodland Trust to change the footprint of the landscape, which has been restored from its former use as a mining facility to its original state, promoting natural beauty, investing in nature and providing a unique outdoor experience for the local public.”

The Derbyshire Wildlife Trust supports the trust’s claim that forming a car park and a new access road at the site would enable it open the site to the public. Meanwhile, the Forestry Commission also submitted a statement in response to the application. It said that “lack of access to woodland is a primary barrier in preventing proper woodland management and financial sustainability for many woodlands across England over the long term”.

Three residents raised objections to the proposed car park, pointing out there are existing car parks at Shipley Country Park and Mapperley Reservoir. They also said that the development would destroy the restoration of pasture in the green belt.

Access to the site is also contained in the proposed application, stemming off the Heanor Road to the north west, using the existing former Lodge House Surface Mine entrance. Two pedestrian crossings and two animal crossing points would be planned across this access road, to cater for the public footpaths and livestock.

An entrance space would be located to the north-eastern corner of the site, connecting with the existing footpath network and the wider countryside. Seating for large groups, an estate map and visitor information would also be provided in this area, and a pop-up visitor centre trailer.

Coach parking facilities for local school groups to visit and disabled persons bay parking on the northern boundary of the proposed car park, would also be provided.

Recommending that the plans are approved, county council officers wrote: “I consider that establishment of a car park would facilitate recreational and educational enjoyment of the countryside. The current use of the land is as a parcel of un-enhanced grassland within the restored former Lodge House site. Because of this there would be no loss of the ecological habitat enhancements established as part of the restoration of the open-casting, as these enhancement features have been established on other parts of the Lodge House site. The new access road would be of a scale and design akin to a country lane and would be screened by hedgerows. There would be no significant adverse impacts on the Green Belt, countryside character, and local amenity.”

Image: Artist’s impression of the proposed site with access and car parking marked in red. The scale of the 400 acre site is marked in white. Image from Appletons.