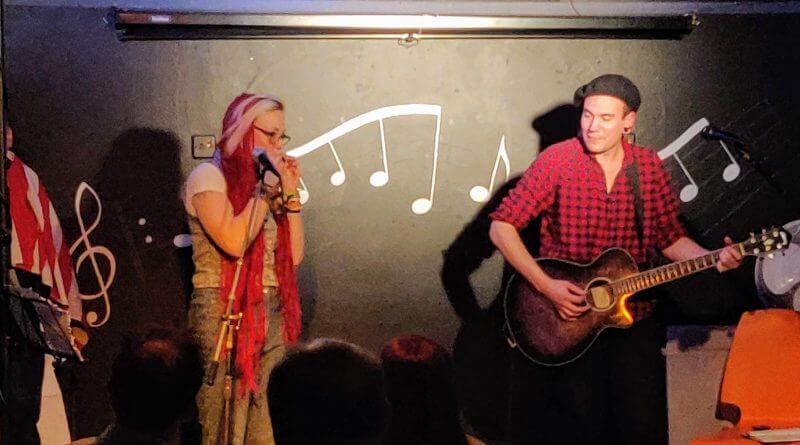 “I come from a boardwalk town where everything is tinged with fraud, so am I”

Whilst few of us – if any – will get the chance to see the Boss performing ‘Springsteen On Broadway’ during it’s current run, we were fortunate to see the next best thing in the shape of Abrucestic’s at the Queen’s Head Pub, Belper. Or, as singer Sophie Sparham put it during the set, “Bruce on Broadway is like Waitrose, we’re like Aldi.”

Abrucestic are Sophie Sparham and guitarist Nick McCann, two members of the larger Ruce Springsteen and the D E Street Band who formed last year to raise money for The Padley Centre, Derby Women’s Centre and the Samaritans. Watched over by a cardboard cut-out of the Jersey Shore genius the duo brought all the sass, strut and working class struggle you’d expect from a good Bruce Springsteen tribute act whilst still having space to make the songs their own.

For those who don’t know Sophie Sparham’s work she’s a literary polymath of sorts who is most well known for her poetry, but who has also been a presenter, journalist, teacher and much more. She’s now turned her hand to singing and does a confident job of invoking Springsteen. What the Boss and Sparham share is a dedication to intimate and vulnerable storytelling, whether delivered by song or spoken word. The same stage presence and audience connection she uses for her poetry performances serves her well here, even if the themes are a bit more tongue in cheek.

The setlist of the night spanned a surprisingly deep collection of classics like ‘Hungry Heart’, ‘Glory Days,’ ‘Dancing in the Dark’ and the ‘The River’ with a few (slightly) lesser known gems like ‘Human Touch’ ‘Bobby Jean’ and ‘I’m Goin’ Down.’ They finished their encore with an epic, full-blooded version of ‘Born To Run.’

Throughout the night McCann and Sparham dorky banter between songs and earnest takes on Bruce’s material made this a tribute band worth steppin’ out over the line for.