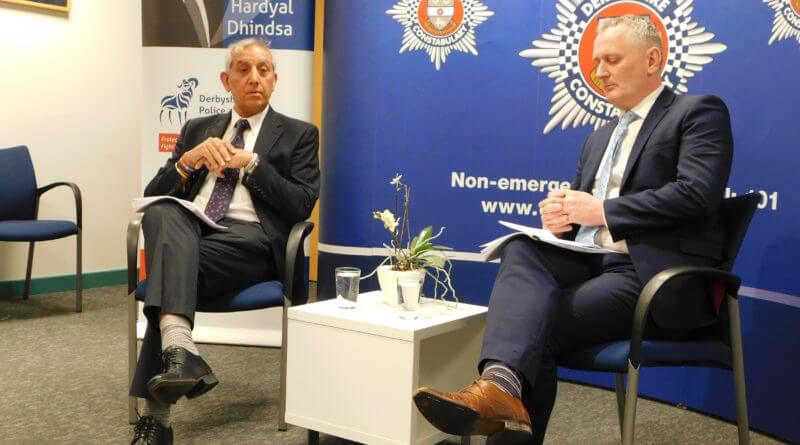 Derbyshire taxpayers are to each pay £24 more this year to get 120 more cops.

On Monday 14th January 2019, Derbyshire’s Police and Crime Commissioner, Hardyal Dhindsa, and the county’s Chief Inspector, Peter Goodman, made the force’s budget announcement for 2019 into 2020.

Key aims include getting more police officers and staff involved on the frontline, visible to the public, enforcing road safety and preventing rural crime.

Alongside these 120 staff and officers will be cops specialising in drones, Automatic Number Plate Recognition (ANPR) technology and mental health.

Some 42 of the new cops will be in the Safer Neighbourhood Teams – 16 will be staff aimed at keeping police on the frontline, while 14 will be Police Community Support Officers. 12 will be full-time police constables.

Another 22 Detective Staff Investigators will also be hired to focus on public protection and domestic abuse.

Both Mr Dhindsa and Mr Goodman were keen to counter the impression that the majority of officers and police funding was directed at Derby – and away from rural towns and villages. To do this, 28 PCs are to be brought into the local policing units in the north and south of the county to “rebalance” the capacity in each area following funding cuts.

Five new PCs will be recruited by the Countywide Rural Crime Team and seven PCs and a Sergeant will be brought into the roads policing unit.

The budget for the coming year, which totals just over £181 million, represents an increase of £11.8 million on last year.
Council tax for policing is to cost £24 more a year for a Band D homeowner (commonly thought of as the average) or £2 extra a month – an increase of nearly 12.5 per cent.  This will lead to a bill to the police of £216.60. However, this is just 11 per cent of the overall council tax bill which residents in Derbyshire pay, with the lion’s share (around 73 per cent) going to the county council, with the remaining portions to the fire service and district or borough council.

Mr Dhindsa said that after “eight years of austerity” what the people of Derbyshire want is “to be kept safe”. He said: “We are punching above our weight but the cuts are making a difference. It is disappointing that the Government’s figures are based on local people paying more, but there is little option but to go along with their plans. We still have a long way to go before we get back to the levels that the Chief Constable and I would feel comfortable with.  That is why I won’t rest until the Government finally gives Derbyshire the fairer, long-term settlement that it needs.”

The county’s Chief Constable says that his force needs 400 more officers to manage current demand. He would not say whether the force would require more officers just to keep up with the pace this time next year, or in the coming years.

Mr Goodman said: “Increasing council tax will enable us to have more officers, but this still pales in comparison to what we have lost.
“Policing is always changing, some of the crimes we are combatting now would have been unheard of before, like child sexual exploitation online and cyber crime. We can’t make predictions of what we might need in the future, but we are currently 400 officers short of the number we need to meet the pressures we face.” He said that key areas of focus would be neighbourhood policing, roads, and frontline investigations. This is on top of prevailing issues with human trafficking and child sexual exploitation.

In total, 51 people died on Derbyshire’s roads last year, Mr Goodman said. He said this was 51 too many.
“We need to rebalance the resources in the north of the county, we have fewer staff and PCSOs, and people in the north are party right when they say there are fewer officers and resources in rural areas. We do get a lot of homegrown crime in the city, but we are also seeing county lines – drug dealing across county boundaries in neighbouring towns and villages – in the north of the county.”

Mr Dhindsa added that rural towns and villages in the north had seen increases in the impact of the county-lines drug trade.
He was asked what he would do if his continued lobbying of government for a higher police grant from the Home Office was not successful.
Mr Dhindsa replied by saying he would continue to lobby, reiterating that it was a shame that council taxpayers were being asked to foot the bill for police budget increases.

If you have feedback or questions about this budget, Mr. Dhindsa and Mr. Goodman will be discussing the proposed budget for policing at the Strategic Priorities Assurance Board at 2pm on Monday 21st January.  The meeting will take place at Force HQ in Ripley.

The full agenda can be found here.

The meeting will begin with 30 minutes of public questions specifically about the budget. The public will not be allowed to participate after that question session, but may still observe the meeting.

Questions can be asked in person at the meeting or submitted via www.slido.com (code #SPA19Budget), or sent via email to the Office of the Police and Crime Commissioner: pccoffice@derbyshire.pnn.police.uk

All questions will be answered either at the meeting or shortly afterwards if the information needed is not at hand.