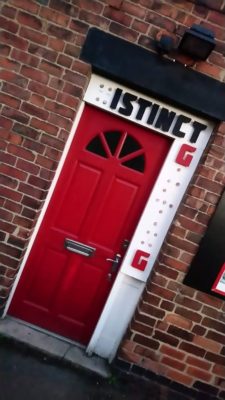 On Tuesday 8th January, Distinct Gaming, off King Street, discovered that their shop had been vandalised.  The vandalism took the form of pulling off some of the lettering of the shop name, which surrounds the doorframe.

It is unknown when this took place, besides some time outside trading hours. This is the second attempt at the same form of vandalism in a month. One of the letters was witnessed being pulled off in a previous attack shortly before New Year.   In pulling off the letters, the vandals have broken the columns which attached the letters to the frame, and the whole signage will need to be replaced.  The rest of the lettering has now been removed to prevent further damage.

Although Distinct Gaming is insured for vandalism, that doesn’t cover the upset, loss of trade, and increased insurance premiums which the vandalism has caused.

The proprietors, Leigh and James, told us, “We are a store that prides itself on providing a welcoming and friendly environment for players of all ages and interests to come together with a shared passion for the games they play. It is upsetting to us that someone feels that damaging the lettering, sticking chewing gum to our sign outside and shouting up the stairs, is something that they feel is amusing at the expense of our players’ enjoyment. Unfortunately having to cover the costs of fixing the damage they incur, it is coming at the expense of providing products and services to our players.”

The vandalism has been reported to the police.  If you have any information about this crime, please inform Derbyshire Police by calling 101, and quoting the incident number: 19000013139