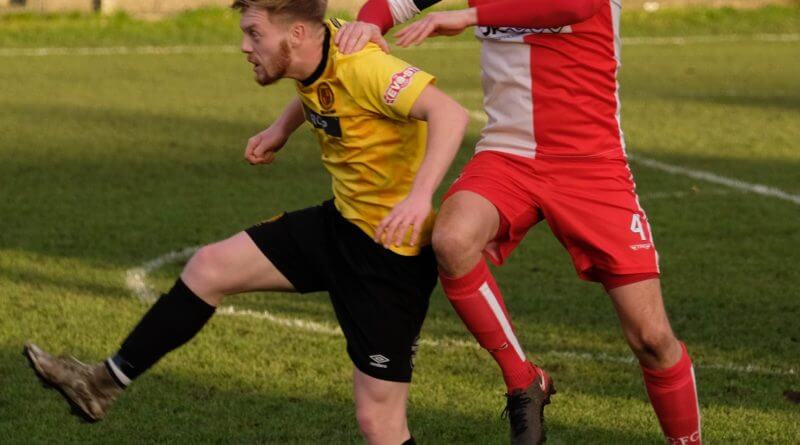 Belper’s Piteu Crouz was the Hat Trick hero for his side in their 1-5 win away to Gresley.

Piteu Crouz put in a man of the match display against Gresley as the Nailers comfortably swept their opponents aside in their first match of the New Year.

Grant Black’s men started the game on the front foot and broke the deadlock less than 5 minutes into the contest.

George Milner tapped home from close-range after Derry Robson’s shot had been superbly saved by Gresley goalkeeper and their December Player of the Month, Oliver Fairbrother.

The visitors didn’t rest on their laurels though and soon doubled their lead after a quarter of an hour, thanks to a superb free-kick from Crouz.

The ball sailed over the wall and nestled into the bottom corner, catching Fairbrother off-guard at his near post.

Seven minutes later, Milner raced past a Gresley defender and played in Crouz, who coolly struck the ball into the net to make it three.

The Moatmen only had two real chances in the half, both falling to Tim Hopkinson. Though, he was unable to beat Belper keeper, Leigh Overton, on either occasion, on his debut for Gresley.

Meanwhile, in the 43rd minute, Milner rounded Fairbrother and tried to slot the ball home for his second of the game, but his effort was well cleared off the line by Albert Lansdowne.

Such as the confidence the away outfit were playing with, Craig Nelthorpe even tried a speculative half-volley from around 35 yards out at the end of the first period and it wasn’t too far away.

Belper had torn Gresley apart in the opening 45 minutes and went into the interval with a commanding 0-4 lead.

Crouz only had to wait two minutes following the restart to complete his treble. Milner was tripped in the box and Crouz showed no mistake from the spot, finding the bottom right corner with ease.

The hosts must have been glad to see the tricky winger substituted with just under half an hour left of the match to go.

Despite leading by five, Belper played relatively conservatively in the second-half, allowing their clear superiority to show by controlling the game without having to move up the gears.

Liam Owen, a new signing from Worsborough Bridge Athletic, made his first appearance for Town in an impressive 20-minute cameo, where he kept things ticking over in midfield.

However, in the 79th minute, 18-year-old, fellow substitute and debutant, Jordan Dodd, won a penalty for Gresley.

Left-back, Lucas Harrison, decisively converted the resulting spot-kick to give the home supporters something to cheer, with little over ten minutes left on the clock.

Town nearly made it six with three minutes of the 90 left to play. Owen crossed for Peterson, but the Belper captain couldn’t quite keep his header down as the ball flew just over the bar.

The score remained 1-5 and referee Richard Watkins put an end to proceedings, probably much to the relief of the Gresley fans.

They sit 14th in the table and things aren’t likely to get any easier for them either, with their next match being against league-leaders Morpeth Town.

Belper are sixth in the standings but will have a tough test in their next fixture too, as they face second-placed Brighouse Town at the Silver X Stadium on Saturday.