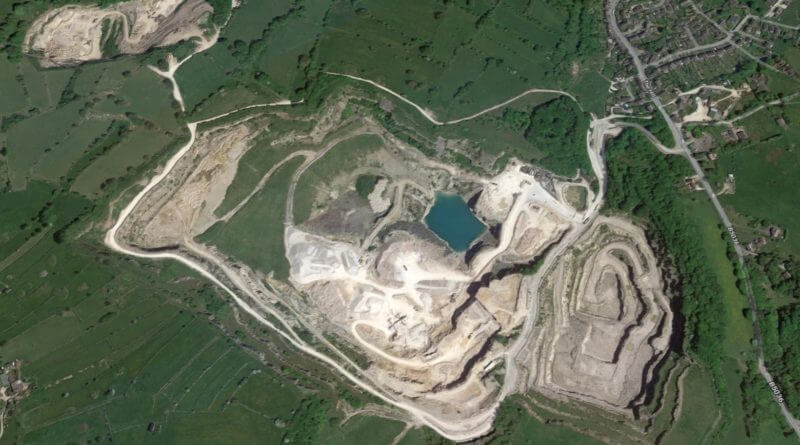 A giant Derbyshire quarry will be reviewed by the county council due to concerns that its operator may miss a target to restore and leave the site.

In a rare move, Derbyshire County Council will review the planning conditions attached to Dene Quarry, near Cromford, which covers an area equivalent to more than 80 football pitches (68.7 hectares). The site, off  The Hill, currently run by construction giant Tarmac, has been worked for limestone and other minerals since 1950.

The most recent planning permission attached to the site was granted by the county council in 2005 and allowed the firm to quarry northern and southern extensions. All mineral operations must have ceased by 2026, at which point, the site is to be vacated.

However, planning officers say that “a number of operational inconsistencies have arisen” and must be addressed.

A report states: “At the current time, it is estimated that there are approximately eight million tonnes of permitted reserves remaining to be worked. Based on current rates of working, it is questionable whether this can be achieved before the end of 2026. Recent site inspections have highlighted that parts of the site are not being worked in accordance with those approved plans in terms of the directionality of the working. Taking into account the sensitive location of the quarry, it is important for these issues to be addressed through a conditions review. ”

The council will further assess conditions preventing or aimed at mitigating the impacts of noise, dust and blast schemes. The authority could tighten some of these conditions or add extra restrictions for the firm to abide by – or face losing its permission to mine the land. It could also extend permission at the site to give Tarmac time to complete its work.

At a meeting of the council’s planning committee today, Monday, January 7, council officers said that management of the the site had slowed due to the impact of the recession, meaning that work had been temporarily stripped back.

County councillor for the area, Cllr Irene Ratcliffe, Labour, said that residents have several key concerns about quarrying, but stated that concerns were not typically directed at Dene Quarry. She said locals were worried about the rebounding of noise from blasting and quarrying equipment across the valley in the Bonsall area as well as the noise and safety issues caused by HGVs on the Via Gellia Road.
Residents in Cromford, she said, raised objections about uncovered HGVs leaving the site, causing dust to spread.

On top of this, some residents also had misgivings about HGVs with unwashed wheels leaving dirt throughout the surrounding routes.
They also want to keep traffic flowing throughout the area, not bogged down by the HGVs. She reiterated that these were not typically directed at Dene Quarry.

Cllr Ratcliffe said usage of a mobile crusher instead of fixed crusher had caused an increase in noise.

John Bradshaw, Estates Manager at Tarmac, said: “We recognise that all mineral planning permissions of over 15 years are subject to a review process and are committed to working in close collaboration with council officers to ensure that the controls associated with our 2005 planning approval are up to date. Should the outcome of the council’s review mean that we need to extend the end date of our operations at Dene Quarry we would of course engage extensively with local residents.”