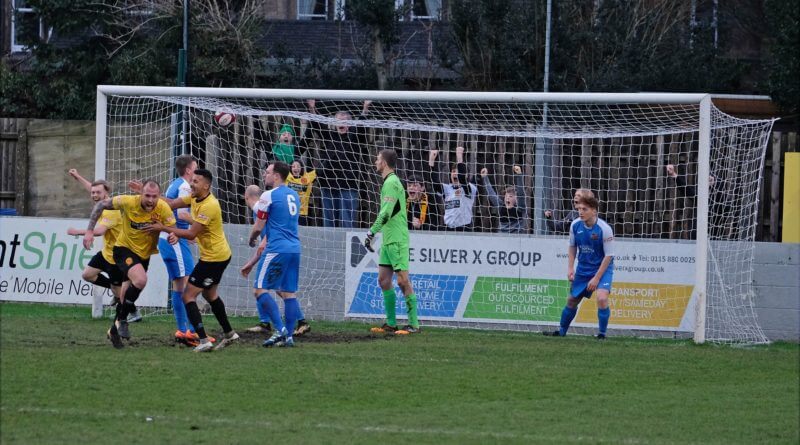 Danny South has been one of Belper Town’s best players so far this season and it was clear to see why at the start of their encounter with his former club, Sheffield FC.

The centre-back almost opened the scoring after a quarter of an hour, but his header was tipped over by Sheffield’s keeper, Kelsey Adam.

From the resulting corner though, South got his goal. He towered above the Sheffield defence and scored with a bullet header to break the deadlock.

Not long after this, the visitors started to grow into the game, with Sam Wright missing two good opportunities to level the score.

At the other end, the Nailers almost made it two when Piteu Crouz saw his effort deflected with Adam managing to keep it out.

In the 26th minute, Sheffield midfielder Jamie Yates had a shot of his own deflected but, Leigh Overton was equal to it in the Belper goal.

Less than ten minutes later, Overton was in the thick of the action once again. This time, saving from opposition forward, Luke Rawson.

Rawson, who was menacing throughout, then saw his shot cleared off the line just moments later, by the immense South.

Town had chances of their own to double their lead before half-time. With four minutes to go until the interval, Nathan Curtis played in George Milner but his shot was well blocked.

Seconds later, South was denied a second after another of his bullet headers beat the goalkeeper, but this one was headed off the line.

This meant that the home side went into the break with just a one-goal advantage, in what proved to be an end-to-end first-half with plenty of chances.

This was not so much the case at the beginning of the second period, with Belper having to wait till the 62nd minute before having a clear opening.

Nathan Curtis couldn’t take advantage of the promising situation though as he shot straight at Adam from a threatening position.

Sixty seconds following this, the away outfit thought they’d drawn level, but Rawson’s tidy finish was ruled out for offside.

In the 67th minute, referee David Hunt controversially showed Danny South a straight red for a forceful challenge on Rawson.

So Grant Black’s side had to play the remaining quarter of the match with a man less than their opponents, who were looking more and more dangerous as the game went on.

They really should have levelled the match in the 76th minute too, when substitute Mitchell Dunne went through on goal, but his chipped attempt sailed way over the bar.

Overton pulled off another fine save, to deny Marc Newsham, while Adam saved from Curtis again as both teams continued to create good chances.

In the first minute of stoppage time, Ben Turner, who was excellent during the course of the contest, kept Sheffield in the game by clearing a Milner cut-back that looked set to find a yellow shirt.

Then, with 92 minutes on the clock, Overton could only get a hand to Dunne’s stinging shot which found its way into the back of the net to give Sheffield a last-gasp equaliser.

That was the last opportunity, as the match ended 1-1, with both teams playing their part in what was an entertaining affair.

Both remain level on 31 points in the league table, with Sheffield, who host Stocksbridge Park Steels on New Year’s Day, sixth, a place ahead of Belper on goal difference, who travel to Gresley on the same day.