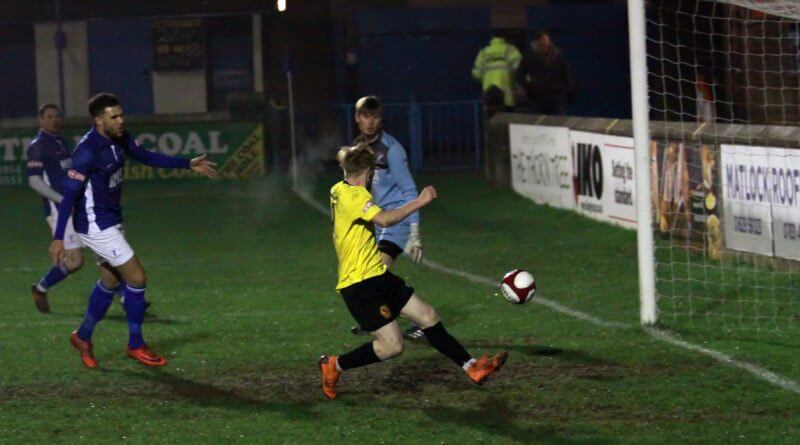 Despite a spirited display, a second half comeback from Matlock Town saw Belper Town crash out of the Derbyshire Senior Cup with a 2-1 defeat.

George Milner put the visitors in front midway through the second half, but goals from Luke Hinsley and Marcus Marshall sent the home side through to the semi finals where they will travel to Alfreton Town or Buxton.

Grant Black decided to name an unchanged team from Saturday’s 3-1 victory at Carlton Town despite the return of suspended pair Kai Hancock and Isaac Assenso.

The game got off to a scrappy start with neither side able to seize the authority. The first shot of the game came from Nailers winger Craig Nelthorpe as he fired over the bar from the edge of the area.

Both teams struggled to create many clear-cut chances, but Matlock enjoyed the lion share of the ball in the opening half. First Cleveland Taylor sent a dipping drive just over Leigh Overton’s crossbar, before Tom Davie did the same.

On the stroke of half time, the hosts were inches away from breaking the deadlock. Left back Clark was dispossessed well inside his own half by Jamie Jackson, he found Craig Westcarr whose finish was heroically cleared off the line by Nailers captain Alex Peterson.

Early in the second half, Jackson played Westcarr in on goal once again, but Belper ‘keeper Overton was on hand to make a smart save.

Following the hosts missed chances, the away side began to grow in confidence with Piteu Crouz causing all sorts of problems down the left. He powered a cross across goal, but no one was on hand to tap home into an empty net.

Just after the hour mark the Nailers made their increasing pressure pay. Crouz was once again at the heart of it as he fired in a superb cross for Milner to tap into an unguarded goal for his second in as many matches.

Belper failed to hold onto their lead for long though as six minutes later Matlock got themselves back on level terms. Substitute Hinsley volleyed a powerful effort into the top corner after the Nailers failed to clear a corner.

Despite the equaliser, Belper’s confidence continued to grow in the game and 15 minutes from time they should have regained the lead. Nelthorpe charged through on goal but his final touch let him down which allowed Pierrepont to smother him and make a good save.

However, with just three minutes to go and against the run of play the Gladiators completed their comeback. Taylor’s through ball found Marshall who finished confidently under Overton to the delight of the home supporters.

Despite the defeat, Belper boss Black was proud of the performance of his players. He said: “[It was] an unbelievable performance against a really, really good Matlock side who are eighth in the league above us, [they have] a massive budget but we competed and some.”

Despite the Nailers four match winning run coming to a disappointing end, Black believes the display highlights how far his side have come in recent weeks. “I’m pretty sure no one fancied us to be anywhere near with five or ten minutes to go tonight, so to be in there and still in the game and really, really competing well it shows progression as individuals and as a team,” he added, “so if I think if people stick with us and we can do that in the league we’ll be not far away from where we want to be.”

Belper next return to action with a trip to 19th place Spalding, as they look to return to winning ways and continue their push for a play-off place.