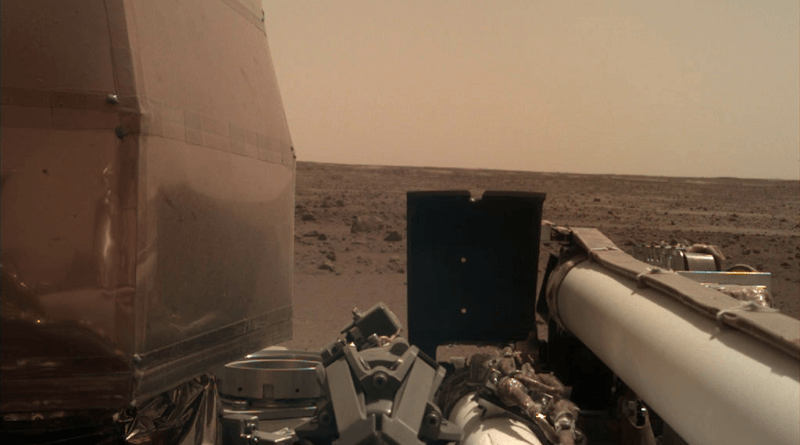 December brings the Geminids Meteor Shower, followed by the Ursids. For those with binoculars it may be worth searching out Comet Wirtanen. Mars is still visible in the evening, and Venus is now prominent in the early morning sky. Let’s hope the clouds stay away and we get some clear nights between now and Christmas.

NASA’s Space Mission, InSight, landed on Mars on the 26th of November. InSight places a single geophysical lander on Mars with the aim of studying Mars’ deep interior. NASA’s objectives are to understand the formation and evolution of the planet, and to determine the present levels of tectonic activity and meteorite impact rate on Mars. (The image above is a raw image of the landing site taken with the InSight robotic arm camera. Dated 27/11/18. Courtesy of NASA/JPL – Caltech).

Previous missions to Mars have investigated the surface history of the planet by examining features like canyons, volcanoes, rocks and soil. However, signatures of the planet’s formation can only be found by sensing and studying “vital signs” far below the surface.

NASA hopes that by studying the deep interior of Mars they will be able to learn how other rocky worlds, including Earth and the Moon, formed. Earth and Mars were moulded from the same materials more than 4.5 billion years ago but then became quite different. One of NASA’s aims is to answer the question of why the planets turned out so differently.

Of the rocky planets only Earth has been studied in detail. The InSight lander is designed to measure the basic structural building blocks of Mars. It aims to study Mars’ core, mantle and crust as well as determining the thermal state of the planet. In addition InSight will measure seismic activity and the rate of meteorite impacts on the surface. By learning how Mars formed, and by comparing Earth’s interior to that of Mars, NASA will discover more about the evolution and formation of other rocky planets in the solar system (including Earth) and the exoplanets beyond. It may even help to narrow down which exoplanets are capable of supporting life.

There are more details on the InSight website, including images and updates from the space mission.

The Comet 46P / Wirtanen may reach naked eye visibility this month. Look for it in the southeast on the nights of the 15th and 16th as it passes between the Hyades cluster (in Taurus) and the Pleiades. Binoculars will give you a better view. With binoculars expect to see a very small, fuzzy blob. There is information on the Comet and star charts indicating how to find it, here: Comet Watch: Comet 46P / Wirtanen

The Geminids meteor shower is one of the most active meteor showers of the year (the other being the Perseids in July). They will be visible from the 4th of December to the 16th, reaching maximum activity in the early morning hours of the 14th of December. Good meteor rates can also be observed on the nights of the 13th, 14th and 15th.

It is thought that Geminids are the result of debris from the asteroid Phaethon. As such, the material that causes the Geminids is much denser than that of other meteors, which tend to originate from the “space dust” left behind by comets. As a result the Geminids are slow moving and some can be impressively bright, leaving glowing trails in their wake.

The predicted rate at maximum activity is around 100 meteors per hour – you will see less than that, but when viewing is good expect to see quite a few meteors. As always, find a dark place away from light pollution, try and see as much of the sky as possible, and look upwards. Best viewing will be on the night of the 13th into the early hours of the 14th, but take any opportunity of a clear night from the 6th of December to the 16th.

The  last meteor shower of the year is the Ursids. This is a minor meteor shower that sometimes performs well. It is visible from the 17th of December to the 22nd. At its peak (December 21st into the morning of the 22nd) it may produce up to 25 meteors per hour. However, the full Moon will be out at the same time – considerably reducing visibility.

Mars is still prominent in the south and shines red. Look for it from around 6pm. On the nights of the 13th and the 14th of December it will appear to be close to the half Moon.

Venus appears as a very bright morning “star”.  Look for it in the south in the early morning sky.

The Spot the Station website is currently showing sightings up to the 13th of December. ISS will appear, tracking across the sky, in time slots ranging from 4.22 pm to 7.04pm. ISS flypasts are relatively short, about a couple of minutes. To be sure of seeing the station it is best to check the Spot the Station site for the exact times, direction and duration of flypasts. You can also sign up for text and email alerts using the link here: Space Station Alerts. The service only alerts you to good sighting opportunities (sightings that are high in the sky and of long duration).

An “Introduction To Astronomy” evening will be held on Friday 21st of December. 7:30 pm onwards at The Friends Meeting House, St. Helens Street, Derby, DE1 3GY. DDAS Secretary, Brain Dodson will be holding a talk on “Observing the Moon” (non members are welcome).

The introductory meetings allow people more time to have their questions about astronomy answered and to discuss topics at a greater length than at the ‘main’ meetings. There is a collection which helps to pay for the rental of the Friends Meeting House (£1 for members and £3 for non-members). If you would like more details please see the website here or email DDAS Secretary Brian Dodson:  secretary@derbyastronomy.org