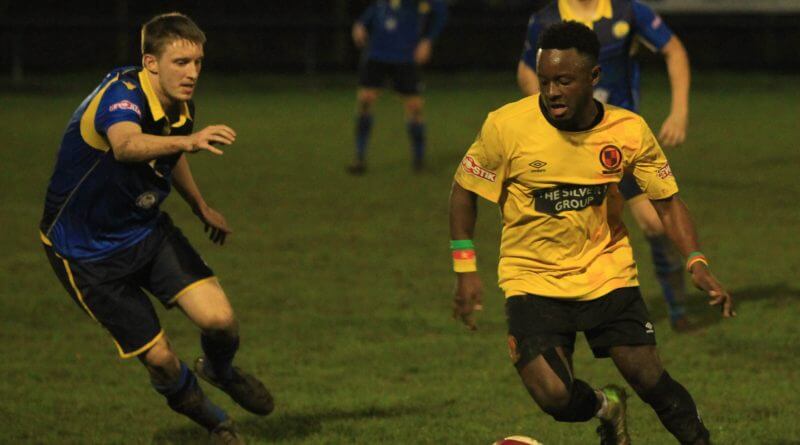 Belper Town continued their fine run of form with a comprehensive 3-1 win over Carlton Town at the Stokeld Stadium.

Goals from George Milner, Nathan Curtis and Piteu Crouz ensured that the Nailers extended their winning run to four matches in all competitions. Aaron Opoku did fire home a late consolation for the home side, but it was too little too late.

The game got off to a scrappy start with neither team able to the seize the authority, but 16 minutes in the first opportunity fell the way of Belper. A good cross from Crouz found Milner unmarked in the penalty area but he rushed his finish and sliced well wide.

Just a minute later, another chance went begging for the visitors. The Carlton defence failed to deal with a Cameron Clark cross and Derry Robson sent a vicious low effort just past the post.

With 26 minutes on the clock Belper eventually made their pressure pay. Craig Nelthorpe delivered a dangerous free kick into the penalty area where once again the hosts couldn’t clear, leaving Milner to bundle in his fifth goal of the season in all competitions.

The Nailers continued to dominate proceedings in the first half and were inches away from doubling their advantage. Nelthorpe curled a shot just wide of Jack Steggles’ post with his weaker right foot.

The only opportunity of note for Carlton in the first half fell to captain Ben Hutchinson. Henry Rollinson cushioned the ball nicely into Hutchinson’s path, but he blazed his shot well over the bar from the edge of the area.

Two minutes after the break, Belper almost had a second. Captain Alex Peterson’s header was cleared off the line as it looked destined for the top corner.

Peterson and Danny South defended resolutely at the back for the Nailers and restricted the hosts to a limited amount of clear-cut opportunities. On 54 minutes though, Carlton should have found themselves on level terms. Luke Smithison planted a superb cross on the head of the unmarked Oliver Clark, however he could only direct his header straight into the arms of Leigh Overton.

Another chance went astray for the Millers just after the hour mark. Hutchinson’s excellent free kick found Opoku, but his glancing header agonizingly found the base of the post.

As the second half went on Belper managed to regain control and once again they should have put the game out of sight. Derry Robson worked a yard of space in the penalty area, but his deflected effort was well saved by the legs of Steggles.

As Carlton pushed more bodies forward in search of an equaliser, their backline became stretched and 16 minutes from time Belper found that elusive second goal. Crouz carried the ball 35 yards before finding Curtis in space, he cut inside onto his left foot and curled in a powerful low effort for his third goal in as many games.

The visitors put the icing on the cake with just four minutes to play from the penalty spot. Crouz was adjudged to have been brought down by the on rushing Steggles, leaving referee Daniel Guest with no option other than to point to the spot. Crouz stepped up and calmly stroked the ball into the bottom corner, sending the Carlton stopper the wrong way.

Belper were unable to hold out for a much-desired clean sheet however, as Opoku beautifully curled in an unstoppable strike from just inside the area for a late consolation.

The result sees the Nailers climb up the table into sixth place, just one point and one place outside of the play off places.

Belper next travel to Matlock Town in the Derbyshire Senior Cup as they look to extend their excellent winning run to five matches in all competitions.