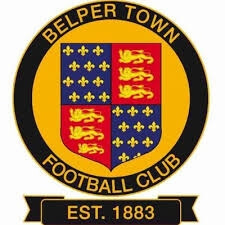 A convincing performance gave Belper their third win in all competitions in the space of seven days, after recording a 2-1 victory over Loughborough Dynamo at the Silver X Stadium.

Craig Nelthorpe put in a fantastic display for Belper and scored the opening goal in his side’s 2-1 defeat of Loughborough Dynamo.

Nathan Curtis scored Town’s second goal before Luke Thorogood pulled one back for the visitors, leading to a nervy finish to the game.

After the match, the Nailers’ manager Grant Black, praised his team saying they gave an “absolutely fantastic performance.

People will look at the score-line and think it was a tight game but in all honesty we dominated from start to finish, it should’ve been 5, maybe 6.”

Black added: “No disrespect to Loughborough, they gave it a go in the end and like I said it looked a bit hairy at times but I don’t think the game was ever in doubt.

I felt really comfortable and I just think it was a classic performance by us, doing everything we’re good at. Being hard to play against, being physical in the right way.”

Belper started the game strongly with Loughborough goalkeeper Charlie Taylor having to make early saves to deny Piteu Crouz and Nelthorpe from opening the scoring.

Despite this, it took Town until the 33rd minute to break the deadlock. Nelthorpe fired the ball into the net from the penalty spot after Danny South was bundled over in the area.

The home side thought they’d doubled their lead two minutes before half-time when Kai Hancock finished calmly past Taylor.

However, the young striker was adjudged to have been in an offside position by the linesman, from George Milner’s through-ball.

Little over five minutes into the second period, the Nailers almost scored again when Crouz set up Hancock who forced Taylor to make another good save.

Two minutes later, Milner spurned a great chance to make it 2-0 when he shot wildly over the crossbar following a clever free-kick from the lively Nelthorpe.

Just before the hour mark, Dynamo forward Ryan Robbins was brought down by Belper keeper Leigh Overton on the edge of the box but the referee Alistair Nelson thought nothing doing.

Overton was in the thick of the action again eight minutes later, when he made two key saves, from Robbins and substitute Liam Read.

With around twenty minutes of the match left to play, Town missed two one-on-one chances in the space of a minute.

Firstly, through marauding right-back Isaac Assenso and less than sixty seconds afterwards, through the tireless Nelthorpe.

With ten minutes to go, the Nailers finally made their superiority count when Nathan Curtis, who had only been on the pitch for five minutes, doubled their advantage.

The sub coolly headed a superb cross from Hancock past the helpless Taylor, to almost certainly wrap the game up.

Speaking about Curtis post-match, Black said: “He’s got a great attitude and he’s obviously come on and reacted in a great way which is what we expect.”

But with just two minutes of the 90 remaining, Thorogood headed Josh Riley’s dangerous free-kick home to give the away outfit an unexpected lifeline.

Loughborough piled on the pressure and nearly grabbed what would have been an undeserved equaliser, but Overton managed to tip Robbins’ powerful strike onto the post.

Belper held on for the three points, leaving them in 7th place in the league table, on 26 points after playing 17 times.

Grant Black also spoke about his team’s league position following the final whistle, stating: “We feel we’ve got a strong enough team to compete and really push to try and finish in that top 6.”

The next test for Black and his men comes on Saturday, when they travel to struggling Carlton Town, who lie 15th in the standings.