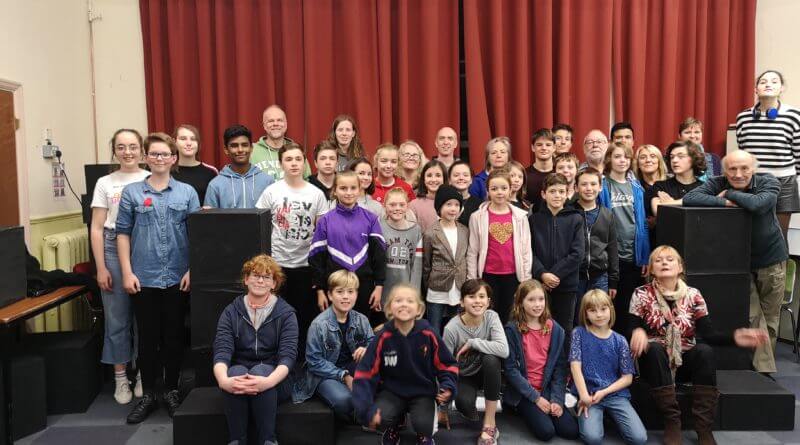 Belper Captive Audience Theatre has assembled a large cast of children to tell the Dickens classic in the run up to Christmas. Directed by Larry Waller, the script has been adapted by a partnership of local actor and writer Terry Stevenson and Belper Arts custodian George Gunby. The script loses none of the tension and darkness of the Dickens classic but lends itself well to a stage performance by multiple teams of local children and a capable adult cast. “It’s certainly not a musical so don’t expect any nods to Lionel Bart says Larry Waller. “Or even to David Lean’s classic retelling – it’s actually miles from any of those adaptations.”

Whilst the story is true to Dickens’ script, Waller is keen to break convention – casting the young French actress Victoria Abbysses as Nancy and a  female Oliver Twist amongst the cast. Once again, and in true Waller-style – the audience will be immersed in the action, close to the stage in this now familiar theatre venue  – quite an apt location being an old school – built less than a 70 years after the period in which the play was first written – a fitting backdrop to the production involving children leading a hard life!

Local businessman and artist, Paul Davies will offer his unique version of the eponymous pick pocket racketeer, Fagin and the usual big characters are all out in force to portray the full bleak realities of the period. Larry Waller explains what the play means to him.

“Mid nineteenth century London was a hard place to be, with poverty, child exploitation and prostitution a real part of the fabric of society. Although modern Britain has moved on we are still reminded there is an underworld that sadly mirrors some of the problems our society has faced for centuries – albeit in different manifestations. This production aims to be a platform for local talent but a lesson to society that reminds us of the fragilities of our society.

If you’re a parent in Belper  – chances are you will know someone connected with the play – there are that many children involved. Most of the cast are a product of Captive Audiences’ Saturday morning workshops in which local children are given tips on acting and drama techniques.

“The bleakness is the reason people should buy a ticket says Waller The exceptionally gifted young cast is what drives this production. They are a  reminder of how lucky we should be to be a part of a loving family, surrounded by supportive friends and being part of an education system that gives young people a chance to prosper – a tribute to the children of Victorian Britain – the ones who never had the chance to be themselves.”

Oliver Twist will be staged at the Strutt’s Centre from Tuesday 11 until Saturday 15 December at 7.30pm with a Saturday matinee at 2.30pm. Tickets are £12 for adults or £8 for under 13s or concessions. Family ticket is £32 for two adults and two children.

Or buy from Time and Again on King Street in Belper