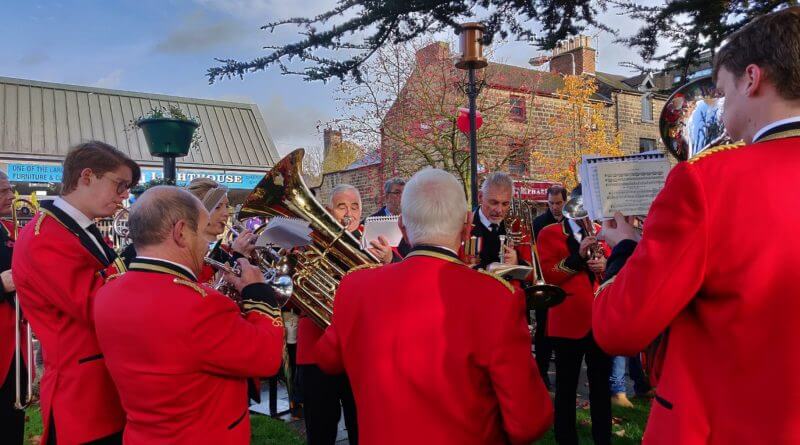 Belper commemorated Remembrance Sunday on 11 November with a series of events throughout the day, on the year which marks 100 years since the end of World War One.

A large crowd of people filled both the Memorial Gardens and King Street as they joined together for the Armistice service.

Local organisations, charities, divisions of the Armed Forces and councillors then took turns to lay wreaths before the two minute silence was observed. A short service was given by Rev. Anne Stratton at the Memorial Gardens, followed by a parade through the town and then later in the evening a beacon is to be lit on the Chevin.

Over the last year the community came together to produce the Belper WW1 Poppies Project. The installations, which were placed around the Memorial Gardens, consisted of four parts: The Soldier Poppies, The Poppyfall, a textile wreath and railing decoration.

Richard Pinkett, from Belper In Wartime, said: “It’s shown great community spirit for a great community project. Everyone has pulled together, coming from all kinds of backgrounds to put on a respectful event.”

Belper’s WW1 Poppies remembers the men lost to the war from Belper, in the textiles the town is famous for. It was designed by Clare Washbrook, made with the help of community volunteers, and constructed with assistance from Madeleine Washbrook.

The Soldier Poppies are 223 standing wired crocheted poppies. Each poppy has a leaf attached bearing the name of one of Belper’s lost men. The military ranks were deliberately removed to equalise the men, and bring them home from their function in the war that killed them.

Clare Washbrook said to Nailed: “I would say that the community crafters who contributed have been absolute stars. Every time there was a problem, someone stepped up to get things done.  They have been fantastic. I am proud of them all and thank them hugely for their work.”

“Madeleine and I are relieved that it all came together in the end, as there were so many parts to weave together, that it sometimes felt like an impossible task.”

The huge endeavour took a considerable amount of work, with hundreds of hours going into it over three months, and the entirety of the last week has been dedicated to bringing all of the different pieces together to construct the whole, on time.

The Poppyfall is a display of community crafted poppies by 9 local yarn artists, symbolising the waterfall-like speed with which soldiers fell.

The wreath, which was also constructed by Clare Washbrook, with the inclusion of community crafted poppies, was sewn together using vintage WW1 thread, and the entire project was otherwise stitched using a vintage yarn needle from the same time period.

Clare added: “There was a moment when we were putting it up where my breath caught and I froze.  I was placing the Soldier Poppies in rows, lining up the Belper men, and although the symbolism of them being lined up was intentional, it suddenly struck me in the moment, as I had not factored myself in to the symbolism and suddenly I was in a field of the dead, lining up the men.

“Immediately after we had put it up, people started to visit the poppies. Some were touching them, which we hadn’t expected.  It is interesting to see how people react to one’s work and this was unexpected, but poignant when I was told that they had come to look for their lost relatives.”

The railing decoration, which includes Peace and Animal Remembrance poppies, also has a large banner by Belper In Wartime detailing each of the soldiers who gave their lives during World War One.

During World War One there were approximately 9.7 million military deaths and 10 million civilian deaths, making it one of the deadliest conflicts in human history. The poppy, which grew on the battle-scarred fields near Ypres, have been used a symbol of remembrance and hope.

Relatives of Belper’s fallen soldiers can get their relative’s poppy from Clare after the installation is taken down. There will be a nominal charge of £3. She can be contacted here.

One thought on “Armistice Day: Belper Meets To Mark 100 Years Since End Of WW1”