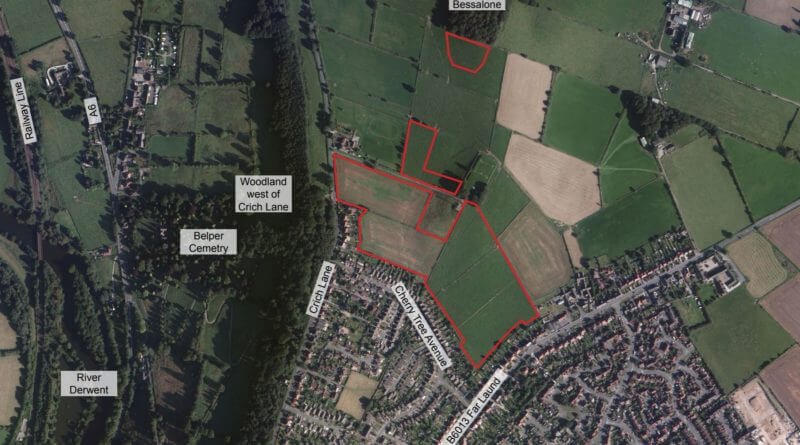 An appeal has been lodged to push through plans for 185 houses on a protected hillside near Belper.

The applicants, C and K Balls of Midland Industrial Estate in Ambergate, seek to build the houses on hilly grassland between Crich Lane and Far Laund, north of the town.

Amber Valley Borough Council, after a vast array of objecting statements from consulting organisations, rejected the application in December last year due to its intrusion into the green belt and Derwent Valley Mills World Heritage Site.

It was seen to represent “an inappropriate form of development” which “would result in significant detrimental visual and landscape change from rural agricultural land to a housing estate”.

A decision date has not been set for the appeal, which will be decided by a government planning inspector, but statements from members of the public must be filed by Monday, November 26.

Comments submitted by members of the public during the initial application will be considered as part of the appeal.

The plans, pitched by agent for the applicant ADDC Architects, would have included 385 parking spaces and 30 per cent of the houses (55) would be affordable housing.

Further tree planting, including an expansion to existing woodland at Bessalone Wood, was proposed as part of the scheme.

A series of consultees, including Derbyshire County Council, Historic England and Natural England, confirmed that the application had not presented the “exceptional circumstances” required to allow it to proceed.

The county council dubbed it “unacceptable” and said: “It is of fundamental concern that the application site is located wholly within the green belt.”

This was also felt by the campaign group Protect Belper, which stated that the “beautiful countryside” must be safeguarded from encroachment.

On top of this, more than 350 members of the public objected to the plans.

Due to the height of the hill, borough council officers said that any development on the upper part of the proposed site, rising up from Crich Lane to the ridge of Bessalone Hill, would be visible from the west side of the valley and would be classed as “harmful” to the World Heritage Site.

As part of the plans, the county council had also requested that £400,000 be coughed up by the applicants for 35 extra primary school places at St John’s Primary School for new classroom space and a further £633,000 for 26 secondary spots and Post-16 places at Belper School and Sixth Form Centre, also for extra teaching room.

Derbyshire Wildlife Trust had found that no breeding bird survey had been carried out at the site – which it says is home to protected species such as skylark and lapwing, with appropriate mitigation required.

The NHS had requested £70,450 to expand surgery practices to cater for the influx of a predicted 463 patients.

Belper Town Council had objected due to the “sensitivity of the land, its green belt status and the visual impact”.

Ripley Town Council also opposed the plans, stating: “Ripley town councillors are very concerned that the increased traffic will cause problems on Newbridge Road and Crich Lane, and there will be a significant impact on all the highways in the area and school capacity will create a reduction in space between the village of Ambergate and Belper.”

One of the ward councillors on the borough council, Conservative Cllr Joseph Booth, had said:

The fact remains that the proposed development is on designated green belt land, the visual impact this would have from numerous locations throughout the town is totally unacceptable.

Any residential development on this site, half of which would fall within the Derwent Valley Mills World Heritage Site Buffer Zone, would be harmful. This is due to the site being an important part of the undeveloped rural landscape providing the setting for the Belper industrial settlement. The site is therefore highly sensitive and the proposal would result in the loss of rural character and landscape.

At the time of the application, and with its Local Plan still being finalised, the borough council could not demonstrate a five-year housing land supply – with enough identified for just over the next three years.

Failing to meet this government requirement can make it more likely for housing applications to be approved at appeal.

As a result, a report compiled by ADDC Development Consultants, on behalf of the applicants, states: “Approval of the application would be a significant benefit and add to the five-year housing supply.”

It also states that the proposal would improve on the existing heritage site “There are significant ecological improvements deriving from the layout of the site and associated landscaping which would mitigate potential adverse impacts of the proposed development.

“The proposal provides improved access to the countryside and maintenance of landscape character through the transition area. The strategy involved will contribute to the outstanding universal value of the World Heritage Site.”

It states that the development would meet all economic, environmental and social impact tests.

Following the result of the appeal, the  Secretary of State for Housing, Communities and Local Government, James Brokenshire, has the power to uphold or overturn the decision, after which the applicants could also continue to the High Court to pursue the application.