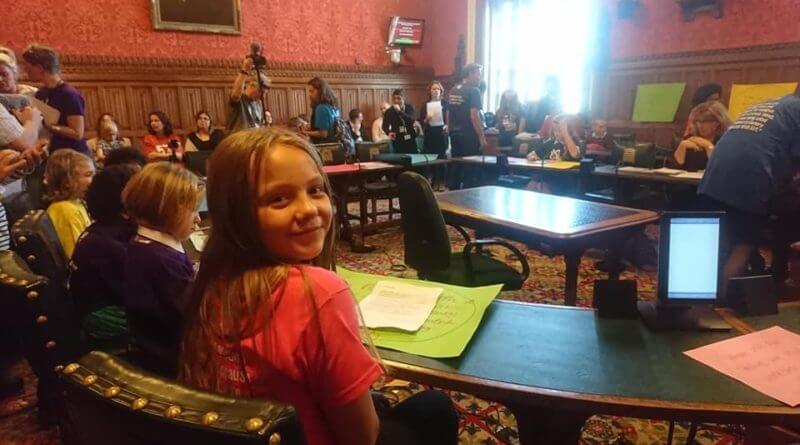 On 10th October 2018, schoolchildren from across the country took their stories of how school underfunding is affecting them and their schools to MPs in Westminster, and Edie Bellamy from Belper, who was given time off from Belper School to make her stand, was one of them.

“My town is famous for the birth of the textile industry –  but if my headteacher only gets a dozen kids who want to do textiles – he can’t put the course on as he simply does not have the money.”

The group call for an end to school cuts involved several organisations which are focused on opposing school cuts, including Save Our Schools, Fairer Funding for All Schools, and Rescue our Schools. It follows on from a protest by more than 1,000 headteachers, who marched on Downing Street in September.

Save Our Schools said that this event,

“demonstrates how parents, teachers, heads, support staff, governors and teaching unions are working together to demand a reversal of the funding cuts in this autumn’s budget.”

“Philip Hammond’s predecessor said this year that ‘ministers would need to see a marked and rapid deterioration in standards’ before they stepped in with more cash,” says parent and teacher Kate Taylor, from Birmingham. “Parents can see that deterioration plainly, as our donations prop up school budgets, school buildings spring hundreds of leaks and we hear of 2,000 SEND children being left in limbo with no state education whatsoever.”

The children got to speak with approximately 40 MPs in Parliament. Edie, who is the daughter of Labour councillor Ben Bellamy, explained her motivation as the belief that MPs “just don’t care enough about us.”

“We want ‎every child to have a high quality education and since 2010 the proportion of pupils in good or outstanding schools has risen. We are investing in our schools; our new National Funding Formula is allocating more money for each school to every local authority; the independent IFS confirmed that funding for 5-16-year-olds has been maintained across this year and next. The most recent volume of the Organisation for Economic Co-operation and Development’s Education at a Glance report said in 2015 among G7 nations, the UK government spent the highest percentage of GDP on institutions delivering primary and secondary education. We recognise that there is more pressure on schools to do more, which is why we have taken a number of steps to help them get the best value for every pound. Our buying hubs and best value deals are helping schools save millions on things like utility bills and other non-staff spend.”

These claims are not substantiated by the evidence, and Derbyshire councillors have debated whether to lobby the Prime Minister directly in order to combat the worst underfunding they have seen.

“We can see with our own eyes the effect that funding cuts are having on our schools. We want to be able to study the subjects we love; we want children who need help to get it. We want all the MPs to ask the government to start funding schools properly so that every child can have a good education.”

Alison Ali, co-founder of the SOS campaign in Brighton and Hove said, “Recent claims on spending and on quality of education from the Department for Education are deliberately misleading, and have yet again led to investigation by the National Statistics Authority.”

Independent figures from the Institute for Fiscal Studies show that funding per pupil had fallen by 8% between 2010 and 2018. There are 66,000 more children in state schools this year than last, but 10,800 fewer staff, including 5,000 fewer teachers and 2,500 fewer teaching assistants. And a recent survey by the National Governors Association shows nearly a third of schools nationwide are already in the red.

Alison Ali continued, “As other state services crumble, schools are expected to do more, with more pupils; yet they’re being given less money, and have fewer teachers. A nine-year-old can see the figures don’t add up – it’s time for Damian Hinds and Philip Hammond to do the maths and reverse the damaging cuts before schools slip so far into crisis there’ll be no coming back.”

A campaign website called School Cuts claims that the total loss to Derbyshire schools will be £12.6 million in cuts between 2015 and 2020. Their information comes from official sources, including the budgets of individual schools as well as government. Save Our Schools estimates the average loss per pupil as £133 per year.

Layla Moran, John McDonnell and Caroline Lucas were amongst the cross-party panel of MPs hosting the unusual Parliamentary briefing. Amongst the many stories told to MPs and Peers of how underfunding is damaging their education, Edie offered:

“It has got so bad that in one in ten schools across the country you can’t do either art, music or drama. Imagine that your dream is to be an actor, but your school doesn’t do drama? Or you want to be an artist or a sculptor but you can’t do art? So much talent wasted and dreams broken. I’ve heard of a child who wanted to be an engineer, but then the design and technology GCSE was suddenly scrapped because not enough children had wanted to take it. And that’s not just one child. Hundreds of schools across the country have axed design and technology, and so thousands of kids have had their ambitions completely destroyed. Our library isn’t open much before school starts and closes not long after school finishes, because it costs to have staff there – we barely use it. It seems to me, that the people in charge in Parliament just don’t care enough about us – if they did then they would give our schools enough money.”

We have already seen Belper School lose its teaching assistants due to budget cuts, as well as learning from leaked Derbyshire County Council documents, that 17 schools across the county were making staffing cuts, with a loss of 51 teaching and support staff. Of these schools, 14 cited “annual budget deficit” as the reason for the redundancies.

We will have to wait and see whether these first hand reports and campaigning from parents, children, teachers, and support staff will have an impact on funding and policy.  But the actions weren’t limited to the day itself – these smart children brought hand-painted pebbles for MPs to keep on their desks as paperweights, to remind them of the thoughts and concerns of children. Parents asked MPs to sign a pledge to lobby hard for a properly funded education system, and distributed dossiers cataloguing the effects of these real-terms cuts in regions around the country.

Twitter responses can be found through these hashtags: #childrenspeakMPslisten #parentsteachersunite

Artwork brought to Westminster by the children: