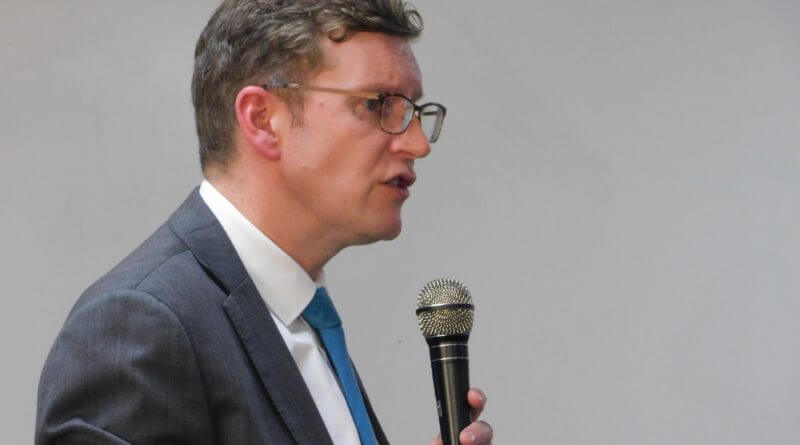 Derbyshire’s NHS chief, Dr. Chris Clayton (pictured), has apologised for the impact which the threat of cuts to volunteer-run organisations has had on staff.

At a meeting of the four Derbyshire Clinical Commissioning Groups today (Thursday, September 27) in Clay Cross, it was decided to put a hold on any cuts to the discretionary grants for the voluntary sector.

The proposed cuts would have seen more than 20 groups and charities have their funding pulled – which could see some collapse entirely, or heavily reduce the number of patients they care for.

As it stands, the CCGs spend £8.5 million a year on the voluntary sector, out of a budget of £1.6 billion a year.

Discretionary grants cost the CCGs £1.2 million a year, and these were due to be cut at a rate of £300,000 a year over four years.

Members of staff within the voluntary sector and campaigners have voiced their concerns at the proposed cuts, stating that the value for money provided by these charities outweighs the amount which could be saved by cutting their grants.

The cuts have been described as “short-sighted” as they would have a “long-term impact”.

Today, Dr Chris Clayton, the chief executive of the Derbyshire CCGs, was prompted to apologise to the voluntary sector by the head of the county’s health and social care watchdog.

Healthwatch Derbyshire chief executive Karen Ritchie said: “The review has caused a lot of stress and anxiety. The whole process of review has been ambiguous.

“What I am hearing from the voluntary sector is that there has been poor communication.

“The way the voluntary sector has been treated just shows that there has been a lack of respect.

“I do feel like they are owed an apology for how they have been treated.”

In response, Dr Clayton, who was appointed last year as the sole head of the CCGs, in the first step towards a formal merger of the organisations, said that the right balance needs to be struck when it comes to talking about cuts.

He said: “Of course I am sorry for the dismay and the uncertainty that some have faced. It is with regret that we have these decisions to be made.”

Dr Ben Milton, chairman of North Derbyshire CCG, and the chairman of today’s meeting, said: “I reiterate Chris’ apology. It hasn’t been easy and we have a number of difficult decisions to make but it would be remiss not to acknowledge the significant impact that this has had.

“We look forward to going forward and working together positively with the review.”

Dr Praveen Alla, of North Derbyshire CCG, was the one member of the governing board to register his “dissent” at the plans to make cuts to discretionary grants.

He said: “This is not the right time to do this and it is not something I can get behind.

“I do not think it is the best use of our time and I think that we should be looking elsewhere.”

The CCGs’ financial recovery director, Sandy Hogg, said at today’s meeting that, if the cuts to discretionary grants are not made this year, then she and her team would have to go away and have a look at other areas in which to make cuts.

Executive director of commissioning, Zara Jones, said that the organisations were struggling to do 100 things at once, and can only spend the Derbyshire pound once, leading to an array of difficult decisions.

Following a vote, it was agreed to delay the final decision on grant cuts until next year.

Meanwhile, the CVS services in Derbyshire are set to be taken on by the county council in a move lead by the authority’s new strategic director of adult care, Helen Jones.

The CCG has approved the £100,000 cuts which relate to these services and there may be a three-month gap in “service provision”.

In a statement from Ms Jones, read to the meeting, she stated that the authority hopes to complete a review of the services, with a view to taking on the funding, over the next six months.

She said that the authority “won’t compromise engagement with the organisations” in order to meet this six-month target.

The four Derbyshire CCGs currently face an uphill struggle to make £51 million in cuts by April next year – out of a total deficit of £95 million – to bring this shortfall down to £44 million.

If the CCGs meet this saving target, the remaining £44 million will be written off but, if they do not, they must make the remaining cuts.

Next year, it is expected that the CCGs will face further financial difficulties, with cuts of £71 million on the cards.

So far, the CCGs have saved around a third of the £51 million mandated cuts.

Louise Bainbridge, chief finance officer for the CCGs says that in the last financial year only the North and Southern organisations failed to avoid an overspend.

The four CCGs are currently seeking to merge to become one organisation to achieve the “economies of scale” to make cuts and improve the quality of services.

The preferred name for this organisation is NHS Derby and Derbyshire CCG.

Some members of the governing board objected to this today.

One said: “We are supposed to be looking at a merger to provide joint Derbyshire working, as one organisation. It should not have two names.”

Another member said: “I’m an import to Derbyshire, from Manchester, but I’m pretty sure Derby is in Derbyshire. Geography wasn’t a strong point in school but I’m sure that is still the case.”

Overall, the membership agreed to the new name in principle, but that it would come back for a vote. The members of the Hardwick and North Derbyshire CCGs were largely opposed to the name.