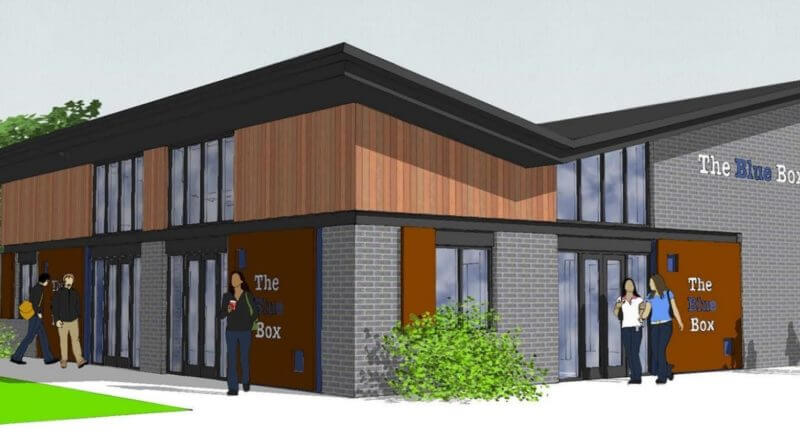 A community centre is set to return to the Manor Recreation Ground in Belper, four years after the previous “Blue Box” was hit by arson and demolished.

Amber Valley Borough Council is set to agree a 30-year deal for the lease of land near the current play area to a band of determined campaigners, Blue Box Group.

The sealing of this lease is due to take place at the borough council’s cabinet meeting on Thursday, September 19.

The original Blue Box building, was located on the edge of Manor Recreation Ground on the Parks estate in Belper. The building was a prefabricated block and was painted bright blue, which led to the name “The Blue Box”.

The building was owned by the borough council, but was used by Derbyshire County Council’s Youth Services, to provide outreach activities to youngsters in the area.

However, following an arson attack in 2014, the building had to be demolished in 2015, resulting in the facility being lost to the community.

Since the loss of the original building, the Blue Box Group, originally formed in 2012, has been seeking to fundraise to provide a replacement building.

The group gained charity status in May this year.

The proposed new Blue Box would include a main activity room able to cater for 50-70 people – depending on configuration – along with a kitchen, to help serve as a community cafe and for basic cookery lessons – along with storage rooms; toilets; baby-changing facilities; shelters for parking mobility scooters; and loops for locking bikes.

By securing a lease with the council, the charity will be able to apply for funds to construct and run the new building.

Belper Town Council is to be the backup on the lease, if the venture proves “financially unsustainable”.

It agreed to this, in principle, in October last year.

So far the charity has received a wide range of funding support for the new community centre, totalling more than £40,000.

The charity states on its website that it has been working hard to create activities for young people in the area, which would then transfer into the new building once it is built.

These activities include: “Supporting the ongoing youth provision through securing funding (e.g. from Public Health) for regular sports provision and activities for vulnerable young people around healthy lifestyle education.

“Cuppa Cake Chat has been running for one year, which is a monthly social gathering for older residents, hosted from the Belper Early Years Centre, where capacity is now being reached.

“Chair-obics is now hosted weekly for residents, again from the Belper Early Years Centre, where capacity is now being reached.”

The charity explained further: “The new community facility building will be available for use by the whole community. Having such a space will have a hugely positive impact on the Parks Estate enabling residents to have somewhere to gather.”

One thought on “Blue Box Community Centre To Return”