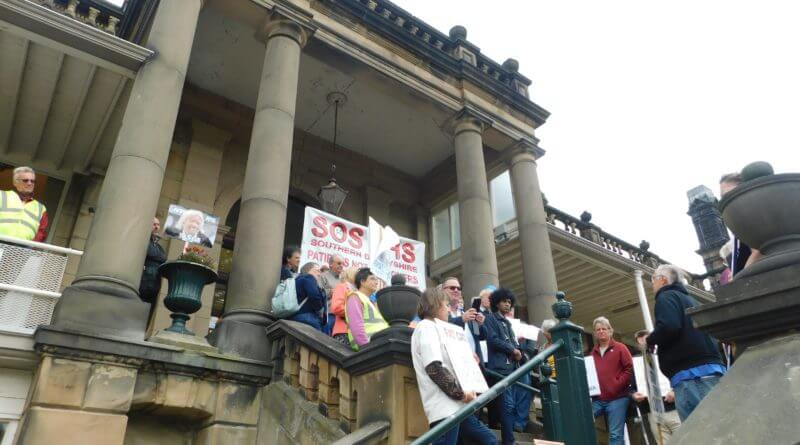 County councillors feel that the proposed NHS cuts in Derbyshire are “quite disturbing” and are being made at a pace which is “quite dangerous”.

The comments were made today, Monday, September 10, at a crunch meeting between county councillors on the improvement and scrutiny committee and the chief executive of the Derbyshire Clinical Commissioning Groups Dr Chris Clayton.

The meeting was attended by more than 40 campaigners who voiced their concerns by staging a protest outside County Hall before the meeting.

Dr Clayton had been summoned by councillors to lay out how the proposed cuts would affect patients and to further explain the proposed withdrawal of funding for voluntary services.

Campaigners had wanted the committee to refer the NHS cutbacks to the Secretary of State for the final say.

But this will not happen as Councillor Irene Ratcliffe’s proposal was voted down by five votes to four.

Committee chairman Councillor David Taylor led a successful motion to bring Dr Clayton and his team back for another meeting on Monday, October 1, to further assess the £51 million in cuts.

He reiterated that he would reserve the right for a referral.

Mr Taylor said that the referral to the government should be “a last resort” and stated that “we are getting somewhere here”.

He said: “I feel we really need to negotiate further. You’ll (Dr Clayton) be back here again very soon.

“The patients are very important and I think the cuts to voluntary services are a mistake.

“They are great value for money and absorbing those services will cost you a lot more money in the long run.”

Dr Clayton was appointed as sole leader of the four Derbyshire Clinical Commissioning Groups last year in the first step towards formal merger – a proposal which is ongoing and is thought could help save money through economies of scale.

He said that the governing bodies of each of the four Derbyshire CCGs (North, Southern, Erewash and Hardwick), had already signed off an outline for the £51 million in cuts which will be made this year but that “there are still elements subject to further process”.

This is what Mr Taylor found “disturbing”. Fellow Conservative Councillor Gary Musson feared that the rate at which decisions were being made was “dangerous”.

Derbyshire’s combined CCGs have a deficit of £95 million.

NHS England has told the combined body that it must make £51 million (three per cent) in savings this year, bringing its deficit to £44 million.

If the combined four CCGs, which organise NHS services in Derbyshire, reach this target by April next year, it will be written off.

However, if the £51 million in savings are not made by that deadline, then the CCGs must make the remaining savings.

Whether the organisations hit this target or not, they are in for further financial woes next year with proposed enforced savings of £71 million on the cards. This equates to around four per cent of their total budget.

The cuts to the voluntary organisations in Derbyshire involve funding through discretionary grants from the CCGs to the respective charities.

This is so that these charities can provide services to the CCGs. These services include offering simple services such as help with domestic chores and gardening to thousands of people across Derbyshire.

The CCGs themselves state that these services help prevent patients from ending up in hospitals, care homes and at their GP sooner.

Dr Clayton said during the meeting: “It is only right that we review what the NHS is able to support.”

He stated that over the next four years, discretionary grants add up to £1.2 million – £300,000 – a year and are a small portion of the overall budget for the county, which sees the CCGs spending £1.6 billion annually.

Mrs Ratcliffe said: “I don’t think that the balance is right. I feel we are dissolving our infrastructure. I have no confidence in aspects of what you (Dr Clayton) have said.”

Mr Musson sifted through the previous of financial reports to the Derbyshire CCGs to find how far back the warning signs stretched.

Chairman of the North Derbyshire CCG, Dr Ben Milton, answering on Dr Clayton’s behalf, said that savings being made this year could not necessarily have been made last year or the year before to head off the financial troubles.

Dr Milton said that the “magnitude of the savings required mean that services have to be revisited” to see what else could be cut from each.

Mr Taylor disagreed with this answer.

Speaking after the meeting, county council cabinet member for public health, and leader of Erewash Borough Council, Councillor Carol Hart, felt that cuts to the voluntary services would cost the CCGs more in the long run, that the volunteer sector provides an extensive value for money, and wished that the CCGs hadn’t “left all this until the last minute”.

She said: “Really to me, it’s just a false economy. The voluntary sector does a fantastic job at a very reasonable rate, they are really good value for money  and the fact is that, if we lose the work that some of these groups do, it’s going to have a real impact.

“It means if they’re not doing the work then it could mean that these people have to go to their doctors or to their GPs or to the hospital which is going to be far, far more expensive.”