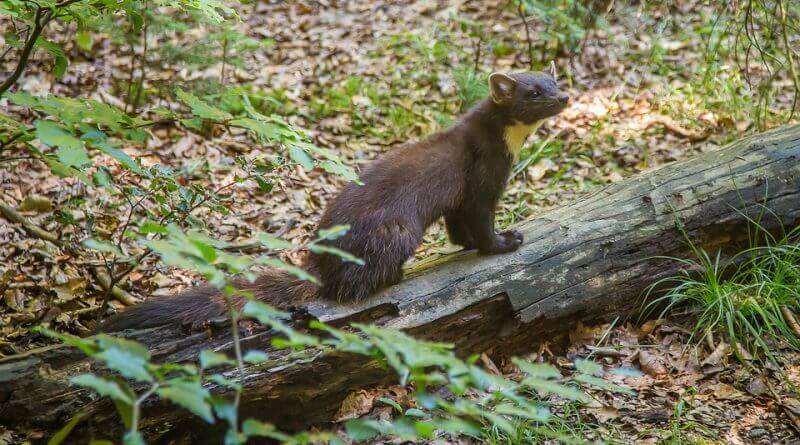 Derbyshire Wildlife trust have announced that a rare pine marten, the first spotted in the region for 16 years, has been found in Derbyshire.

Irene Brierton, who reported the finding and recovered the body, found it on a roadside between Belper and Ripley – it is the first confirmed presence of a pine marten in Derbyshire for 16 years.

The discovery has led the Wildlife Trust to look into setting up some trail cameras in the area to see if they can find any more evidence of pine martens.

This rare animal was once the second most common carnivore in Britain, but loss of habitat, the fur industry and culling associated with game shooting has driven the species close to extinction in England.

The last confirmed sighting of a pine marten in Derbyshire according to the Derbyshire Mammals Directory was in 2002; it was shot by lampers at Baslow and is now a taxidermy specimen on display in Sheffield Museum.

Wildlife photographer Andy Parkinson spotted it as he was on route to Wales but realising its importance he passed on the information which enabled its body to be retrieved. Lizzie Croose who heads up the Vincent Wildlife Trust’s work with pine martens has since confirmed it was a male.

Angela Mason, Derbyshire Wildlife Trust’s Head of Living Landscapes South, said: “This is a fantastic discovery. We would love to see pine marten’s return to Derbyshire. Pine martens need woodlands that are well connected and full of a mixture of species and food sources such as small rodents, birds, eggs, insects and fruit in order to thrive.

“We’re working hard to ensure there are more wild places across Derbyshire for these special mammals, especially within the Lower Derwent Valley within reach of where this one was discovered – we hope this will be the first of many!”

Pine martens are about the size of a cat and have chestnut brown fur with a creamy yellow bib over the throat and chest. They are related to weasels, ferrets, polecats and otters. Male pine martens defend large territories up to 25km2 and can travel as far as five miles in a single night.

There have been several sightings of pine martens in Derbyshire over the years but little physical or photographic evidence. If you think you have seen a pine marten please report your sighting here.