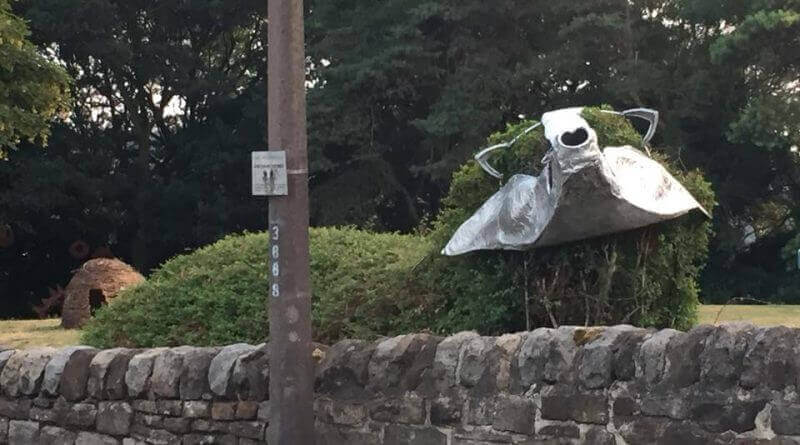 Transition Belper’s team of volunteers who have carried out a much-lauded transformation of the Crich Lane Festival Gardens are on the brink of walking away from the project.

The steps they took to collect and store water for the gardens during this long, hot summer have been condemned by officers of Amber Valley Borough Council who bluntly told the group that “no water shall be stored on site.”

Team Leader, Richard Bett, has been delivering up to 50 litres of water per day to use on flower beds and newly grassed areas to encourage seeds (provided by AVBC) to germinate and grow.

In an innovative approach a temporary canvas was used to make a shallow ‘pool’ that collected around 1,000 litres of water during recent thunder storms. This was to be transferred to water butts on site thus, for a while at least, removing the need to transport water to the gardens. However, at a site visit by council officers on Thursday the team were told to use all the water there and then –  thus negating the environmentally friendly water harvesting.

At a group meeting this morning (Sunday 5th August) the team were unanimous in their condemnation of the Council’s heavy-handed approach and complete lack of any practical positive suggestions to resolve the problem. They agreed to put forward a number of suggestions to the Council to attempt to work out a suitable compromise. Whatever happens, if the council cannot agree a solution within a week the team are set to resign and leave Transition Belper with the choice of attempting to find a new set of volunteers or abandoning the project.

The Council also condemned the willow bee-hive saying its “come to the end of its life, brittle, heavily leaning and contains many protruding twigs inside.”  Whilst this could have been relocated to someone’s garden Council workers have removed it and taken it away. It is thought to Loscoe Tip. They did suggest a living willow structure would be looked upon favourably.

Whilst the bee-hive was over a year-old newer willow sculptures created at Belper Goes Green were also ordered to be removed pending an agreement on the method of affixing the spheres to tree branches. In their view “the ratchet straps are inappropriate for hanging items and could cause strangulation” despite it taking a 6-foot-tall person on stepladders to reach the straps.

Once a hanging method is agreed the spheres can be rehung. It was also requested that the willow arch – made at Belper Goes Green along with the spheres – be located in a position that makes it impossible for children to run through thus removing the risk of a scratched face or arm.

They also criticised and condemned the fixing of the badger head to the topiary bush despite Richard Bett having over 20 incident-free years’ experience of installing such artworks. Although they mentioned some “sharp edges/burs that need removing from the outer and inner edges of the badger’s head” there was no mention of the dilapidated railings at the entrance with sharp edges aplenty that they are responsible for.

It is always the case that volunteers on projects such as this need to feel they have a constructive and positive relationship with the powers that be. This is certain to break down when those powers are proscriptive and seen as ‘over the top’ and lacking any motivation to provide solutions. A ‘can’t do’ attitude can be destructive whilst a ‘can do’ culture is positive and inspiring.

Want to get attitudes changed? Write to your councillor – Ben Bellamy or Joe Booth, email Amber Valley Council and make yourself heard on social media.

19 thoughts on “Crich Lane Volunteers Set To Walk Away”