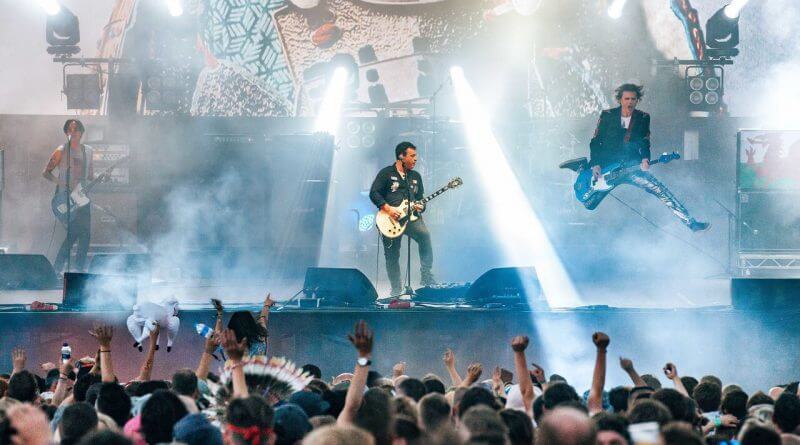 As Nietzsche – or Rusty Cohle if it suits you better – once said “everything that happens is inextricably knotted to everything that will happen.” Time is flat circle and we’re destined to repeat our actions over and over again. When the Manics formed in 1986 we had a former celebrity POTUS, out of control free-markets, war in the Middle East, political sleaze, fascism on the rise and regurgitated culture hyper-speeded up to breaking point – surely such a god awful hellscape couldn’t come around again could it?

It’s little wonder then that the band decided to shy away from playing tracks off The Holy Bible, instead opting for a well received greatest hits run through that began with Motorcycle Emptiness and ended with A Design For Life.

Throughout, the Franz von Stillfried-Ratenicz photograph ‘Samurai Warrior 1881’ from the Manics 13th album, ‘Resistance Is Futile’ loomed large over the band on stage. Years after the Samurai were abolished this lone warrior poses for an expat German globetrotter importing an idea of Japan back to Europe. It’s an image and an album of mixed messages and none of them are easy. Is it time to roll over and admit defeat or keep fighting? Like the Samurai the middle-aged Manics sit amongst the young festival’s line-up as “curios” of Britpop, brazenly firing through a performance with breakneck energy, an expansive repertoire of bona fide hits that would put most bands to shame and even a cover of The Cure’s In Between Days thrown in for good measure. You get the feeling they could have done another hour without breaking sweat, if only the time slot had allowed.

Midway through, the crowd joined in to wish Sean Moore a happy 50th birthday, Nicky Wire showed some love for the numerous chip shops of Matlock Bath and James Dean Bradfield reminisced over a gig at the Old Bell in Derby that took place 20 odd years ago – it all seems a far cry from the indifferent mutterings of The Libertines who headlined straight afterwards. Time to give in? Three decades on James Dean Bradfield’s melodies and glam guitar riffs are as strong ever, particularly on Yves Klein inspired International Blue, whilst Wire remains cool AF to the bitter end.

Maybe they’re not so tired yet.

Wire holds his lyric from new track Hold Me Like A Heaven “what is the future of the future? when memory fades and gets boarded up” up as one of his favourites. There’s an ultra-melancholic confusion to the unreservedly poppy anthem, of a lyricist struggling to choose where to direct his energies and the vision of the band after 32 years. Perhaps it’s not in the gut-wrenching vitriol of The Holy Bible, but rather the ideas of optimism, hope and loss which are on display in ‘Resistance Is Futile.’

Like many of us, Wire’s been left asking “what is the truth in a post-truth society?”

His answer, and the bands in general, seems to be resilience rather than resistance.