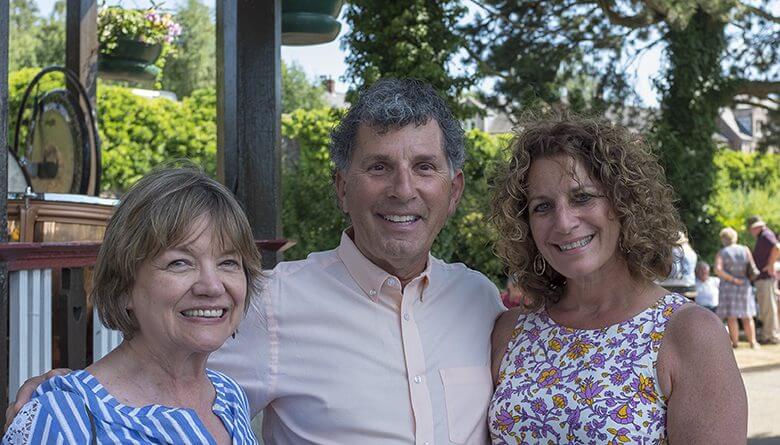 An American delegation from Pawtucket has been visiting this week to celebrate 24 years of twinning with Belper.

Bob Billington, his wife Debbie and Natalie Carter, who are all from the Blackstone Valley Tourism Council in Rhode Island, Massachusetts, were part of Sunday’s (July 15) well dressing ceremony at the River Gardens. The procession, which also included the town Mayor Tim Sutton, concluded at the bandstand with Father Jonathan Page blessing the wells.

Next year is the 25th anniversary of the twinning of the towns and Pawtucket is hoping to bring 25 visitors over to learn what the twinning is about and what Belper has to offer. The American guests were accompanied by film-maker Christian de Rezendes, who is making a documentary about Samuel Slater.

The towns have been twinned since the 11th of June 1994. The twinning recognises the role played in Pawtucket by Slater who was born in Belper and worked in the local mills. He emigrated to America after learning Strutt’s mill-building techniques and is credited as a key player in the American Industrial Revolution.

Adrian Farmer, site co-ordinator for the Derwent Valley Mills World Heritage Site, said: “The reason why Belper and Pawtucket are together and working side-by-side in this twinning arrangement is because of the Strutts. It’s fantastic that they made that link 25 years ago, wanting to find out about Samuel Slater’s roots.”

“Because it’s 25 years since the work started to twin initially, over on that side they are particularly keen to see a revival of the twinning activities that were happening in the 1990’s…They are a lovely bunch of people and it would be great if we could help them to achieve their dreams of having a strong link.”

Speaking about the 25th anniversary re-signing in 2019 Bob Billington said: “We are hoping to bring a good size group over that are new to the twinning and want to learn more about it and learn more about how the English approach their economic development, historic preservation, waste water treatment, fire services, police services and government services.

This year the theme of the well dressings in Belper is ‘Heritage’. The visitors had had a chance to see the well dressings being created earlier in the week and help out by placing some petals. The well dressings will be on display at the River Gardens until Thursday July 19. Here is a selection of the beautiful designs to be seen, created by the Belper community. Click to enlarge gallery images.

All photographs by Emma Clinton