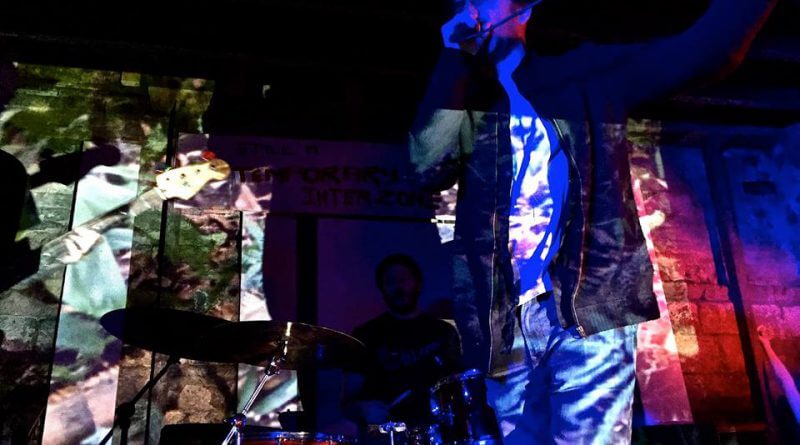 Not everything comes in neat, tidy packages delivered to your door.

Sometimes though, when you can be bothered to peel off the sticky tape, they can spill out their insides in a shower of glorious chaos and leave you wondering why you ever hesitated. KGB was such a parcel. Kunst Gallery appeared in a small Derbyshire town and a couple of years later it disappeared, leaving in its wake some sadness, some speculation and some celebration.

In fact KGB was a celebration that went on for two years. I met the folks at Kunst while I was waiting on a nice man fitting some new tyres on my car. Across the road from the tyre place a couple of gents sat in the summer heat on metal chairs outside a gallery with cups of coffee and paperback books. I said “hi” and we got on well. I had lived in the town for a few years at that point and had no real ideas about where I might fit with the work I produce or the type of performance I’m interested in. I had been booked to perform Tony Harrisons epic poem ‘V’ by the organisers of the local arts festival but they pulled me off their bill after saying I came across to them as racist (more than a little odd considering the clear anti-racism sub-text of the work!) Kunst didn’t hesitate to put the performance on in the now quite famous Nail Shed at the rear of the gallery.

I recited the work over forty minutes one evening to a crowd that spilled out of the venue and listened attentively in the pin drop silence that Harrisons writing deserves. Then THE COWS from Macclesfield wowed the same audience with a set of amazing 60s covers. People danced and laughed and we all went home.

Later on KGB collaborated with the small but beautifully shaped Head Of Crom records to press and distribute records by Crimewolf, the band I was lucky enough to be involved in. They also let me have an exhibition of my paintings and believe me, I can’t usually get arrested around these yards. But that was just my involvement. For those next couple of years KGB was host to a super diverse stream of music, theatre, comedy, performance poetry, film, sculpture and painting and much more. Sometimes the nights in the shed were chaotic and challenging, other times they were more subdued, but always thought provoking and so many people loved it and we got involved because we loved it.

‘COME GATHER’ was the hook line on their social media. COME HANG. Hundreds did and the place took off at a pace. Sometimes the monthly nights sold out but you could always pop your head in and ask to come in and the answer would always be yes. That was it…all you had to do was engage. Just like the other fine arts organisations in Belper…if it was there the community would get involved. KGB was always happy to air new acts and artists that perhaps might have struggled to find a voice or an outlet elsewhere and it filled a little gap in an already thriving arts scene.

Many of the works in the gallery were produced by folks who could have had a job on to get their stuff out there. People with autism, the visually impaired and folk with anxiety / depression issues, children or people in their senior years…all were welcome and encouraged. The back wall of the venue was daubed in red paint with the words “TEMPORARY AUTONOMOUS ZONE” and this was probably the biggest clue to the identity and intention of the place. KGB was the people who came and gathered at the gallery and the Unstable Stable at the back. Those amazing people.

Kunst put on groovy bands like Stupid Cosmonaut, Helicon, Adrena Adrena, The Queens Riots, Paytron Saint, The Evil Usses and the wonderful Dorcha. It showed fascinating documentaries like The Ballad Of Shirley Collins and Christine Franz’ coincidentally titled Sleaford Mods film, Bunch Of Kunst. The shed hosted talks and lectures by writers, philosophers, photographers and raconteurs. Work was displayed by brilliant artists like Julian Woodcock, Eleanor Adair, Adam Quinn and the late Dave Pearson, surely one of this country’s most intense and prolific painters.

One evening saw a the great Catalan provocateur, Jordi Valls conduct a troupe of percussionists and avant garde performance artists in a mind blowing collision that crossed multiple genres. This was in a shed. In Belper. Jordi Valls in a shed in Belper. Anita Varneys exhibition of the mighty Throbbing Gristle at the long lost Ajanta Theatre. In a shed in Belper. There was more than it’s reasonable to list here and the nights kept coming. KGB space was given over to safe discussion groups for women, safe discussion groups for men, to anyone who wanted to come and talk about any subject they liked around a log burner in the winter months, the whole gallery was once given to young men and women fresh out of school to do with as they felt appropriate. And there’s the thing….not everything is a neat tidy package.

In the days following the quiet goodbye of KGB, comment and speculation began to find its way on to the pages of the internet. The good people who had gathered and hung out were full of praise for the diversity, the guts it takes to start out on a journey and hold fast to the road like Kunst did. Others have been a little more cynical about the end of KGB, adamant that it was simply a financial issue that brought about closure.

Some commentators on the local arts scene branded it as quite simply a failure. “It failed,” they concluded. There was criticism of a lack of business plan. None of the cards and prints and other expected trappings of a gallery. Which is all good if that’s what keeps boats afloat, but we are in a time now when galleries have become cafes, more about craft beer and cakes than about art, more about management and commerce than creativity. Sometimes the two have to hold hands but certainly not always.

Have a look around Derbyshire and you may find galleries that seem to have set up in order to keep pushing the work of the artists who opened them. Have a listen to the people who talk more of the money available from Arts Council funding than they do of what they want to do as artists. All fine. It’s just that there are also places like KGB that make their own money through graft and determination and then put that money back into paying artists and performers. KGB wasn’t taking any funding nor was it asking for any. Maybe no glorious five year plans but definitely a blast!

KGB didn’t stock greetings cards or fridge magnets (well maybe once or twice!) but it stocked books by local poets and writers. Books that challenged the university system. Publications that questioned trends. Records produced by small, independent labels. Memorabilia from lost times. Maybe these folks will be delivering a talk about KGB one day, in a place very similar somewhere. Just like David Bonsall and Hector Heathcote spoke about the Ajanta in the Nail Shed.

So there’s my take on things. No failure, just success. Two years or more of total wonder pulled off by people alongside their (also successful) day jobs. No business plan required. Shows what you can do with a bit of fire under your bonnet! CHIN CHIN