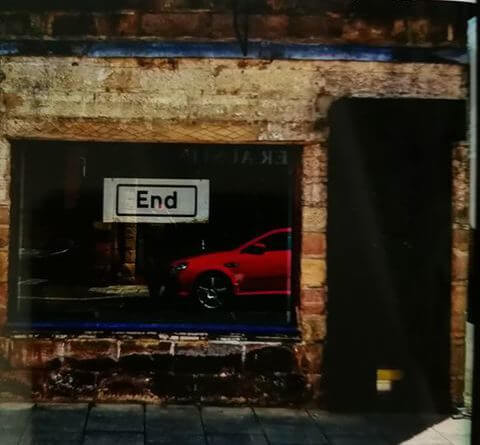 Belper seemed to be an unusual place to open a contemporary art gallery. Most “art” in small towns, in art fairs, in open houses, in white walled galleries that serve coffee; I am not sure whether it is art – or whether it is craft or decoration. It always perplexes me, why is the same subject matter used over and over again? Landscapes, treescapes, portraits, flora and fauna, heritage buildings – maybe a bit of industrial heritage as well (water wheels, windmills, steam trains, horses pulling ploughs, bridges, canals, barges), still lifes. Every now and then a bit of Impressionism. It all seems as if the theory of art and art technique stops somewhere around the end of the 19th century. It is all a bit polite, all in good taste. Figurative art and western ideas of perspective dominate, it is as if the challenges presented to art by photography and the mass reproduction of the image have been ignored; as if modernism (never mind post-modernism) has not happened yet.

And this is strange because the art world is not like that at all. Contemporary art is in the zeitgeist; Tracey Emin, Damien Hirst, Grayson Perry are household names, the Tate Modern is one of the most visited galleries in the world. We know about this stuff, talk about it, have opinions on it – but it is hard to find in our own backyards.

When the Kunst Gallery opened just over 2 years ago I thought, brilliant! someone has realised that the audience for contemporary art has grown, that contemporary art belongs in rural towns as well, that those who think art should be exciting and fun and provocative and adventurous are also to be found in places like Belper. I thought it was the harbinger of something else – a touchstone, Belper’s own “cultural zone” in Campbell Street.

And KGB was more than an art gallery, it was a meeting space, an independent record store, a shop that promoted local writers and pamphleteers. When Jonny also turned the Unstables bar into a performance space (a Temporary Autonomous Zone) it seemed as if he was on a mission to attract everything weird and wonderful and fascinating into Belper.

These are just some of the events Kunst has staged since it opened: A performance of Tony Harrison’s poem “V”; The east midlands premier of the film, Tony Conrad: Completely in The Present; Daisy Campbell’s Pigspurt’s Daughter; Stupid Cosmonaut (supported by a lecture on meteorites); Gigs by local band, Crimewolf; A performance by Richard Strange; The East Midlands screening of the Ballad of Shirley Collins; An exhibition of photographs documenting Throbbing Gristle’s performance at the Ajanta in Derby; A very rare performance by the art provocateur, Jordi Vallis.

I wish that this list could go on – but the Kunst Gallery closed down on the 2nd of July.

When I walked past the KGB this Tuesday I was genuinely perturbed. Had it closed? Or was it between exhibitions? Was the stripped and empty building an artwork in itself- a  gnostic gnegation, inspired by the philosophy of the Cathars as described by Daisy Campbell in the production of Pigspurt? I sent out messages and received a message back that, no it was an ending after all.

We hope that Nailed has been a good supporter of the Kunst Gallery and there is little left to do now but to thank the owners of KGB, Jonny and Lisa Thomson, for creating such a marvellous space for Belper. We admire their energy and vision and appreciate all their hard work over the last two years and we wish them well with any future endeavours.

The Kunst Gallery won’t be forgotten. Some places resonate in the collective memory. These are the places where good things have happened, where people and forces have gathered and for a moment coalesce into a focal point of energy, ideas and inspiration. The Kunst Gallery will be talked about as one of those places. We are sorry that it has gone.

(Edited 14th July 2018: Reference to the Belper Arts Festival removed by the Author).

6 thoughts on “KGB: An appreciation”