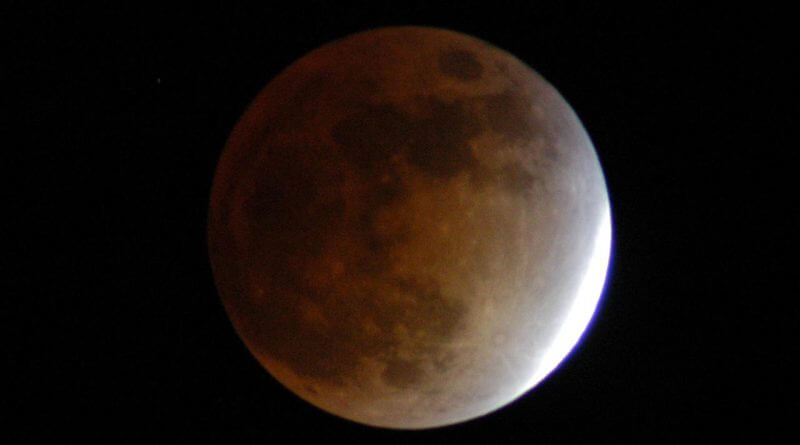 In July’s Night Sky, there is a Total Lunar Eclipse on the 27th of July. Venus shines brightly in the west and Jupiter is shining in the south. Saturn and Mars are also visible, low down on the southern horizon.

Total Eclipse of the Moon: 27th of July.

On Friday the 27th of July there will be a total eclipse of the Moon. The eclipse will be visible throughout the UK – but you will need a clear southeast horizon to see its early stages.

On the 27th, the Moon will start to rise at about 9.00pm over the southeast horizon. The Moon will already be eclipsed when it rises and will appear to be dark and red, an impressive sight when set against the blue sky of early twilight. The Moon Illusion will also be in effect, the Moon looking larger because it is close to the horizon.

During an eclipse the Moon darkens to a deep red or orange colour (see the picture above, courtesy of NASA images). The maximum of the eclipse will be around 9.20pm and, at this stage, the Moon will be very low in the sky – barely peeking above the horizon.

The total eclipse continues until 10.15pm. For most viewers it will be easier to see from 10.00pm onward – about 30 minutes after sunset when the Moon is higher in the sky. At this stage look out for Mars, just below the Moon and also shining red.

At around 10.15pm the Moon will start to escape the Earth’s shadow and, over the next hour, the Moon’s brightness will return. By 11.20pm it will be all over.

July brings some minor meteor showers and the start of the Perseids shower – which peaks in August.

To summarise, in July there is increasing meteor activity above the background rate of 1 or 2 meteors per night, particularly in the last days of July (from the 27th – 29th). However, the best time to go out meteor watching will still be the peak of the Perseids in mid-August.

Venus shines brightly in the west and is very impressive in the early hours of twilight, set against a blue sky. On the 15th of July it will be close to the crescent Moon, about half an hour after sunset. Venus is sinking closer to the horizon now, by the end of July it will be difficult to find.

Jupiter is clearly visible in the southwest from around 10.00pm. On the 20th of July it will be close to the Moon.

A telescope will show: all 4 of Jupiter’s Galilean moons, Jupiter’s equatorial bands and, maybe, the Great Red Spot (GRS). With binoculars you should be able to see the planet as a small disc and the larger moons as small pinpoints of light close to the planet.

Jupiter is relatively low in the sky and will remain so throughout July. If you have a telescope try and find the Great Red Spot (the giant storm that circulates around the planet). Despite its name the Great Red Spot is quite difficult to see. To increase your chances here is a list of times and dates when the GRS will be on the centre line of the planet: 10th, 23:27 / 15th, 22:39 / 18th, 00:15 / 20th, 21:45.

Saturn is visible in the southern part of the sky, look for it from around 11.00pm. On the 24th it will be close to the Moon.

Saturn is low in the sky and this means that it will be difficult to get a stable image if viewing through a telescope, however even under these conditions it will still be possible to see the ring system that surrounds the planet.

On the 27th of July, Mars will be closest it has been to Earth since 2003. Mars is visible in the southeast from 11.00pm onwards, it is shining bright and red. Unfortunately it is very low in the sky and you will need a clear horizon to see it properly. Look out for it under the eclipsed Moon on the 27th. Because Mars is low it is difficult to observe through a telescope. If you can find it in a telescope you may be able to see some surface detail – worth a try.

ISS can be viewed in the early hours of the morning between the 6th of July and the 17th in a time slot between 00.40am and 4.05am. ISS flypasts are relatively short, around 5 minutes, so to be sure of seeing the station it is best to check the Spot the Station site for the exact times, direction and duration. It is also possible to sign up for text and email alerts using the link here: Space Station Alerts. The service only alerts you to good sighting opportunities, that is sightings that are high in the sky and of enough duration to have a chance of spotting the space station.

Derby and District Astronomical Society are holding a barbecue on Saturday, 7th July from 7:30 pm onwards at the Society’s Flamsteed Observatory, North Lane, Brailsford, DE6 3BE. Admittance is free and the barbecue itself is provided but please bring your own food and drink. If the skies are clear there may be an opportunity to do some solar observing during the day and night observing later. New people are always welcome and you can bring your own telescope as well as food!

If you would like more details about the barbecue or DDAS please email their Secretary, Brian Dodson.

One thought on “Space Is The Place: The Night Sky Over Belper, July 2018”