Derbyshire Constabulary need help to find a large amount of unique jewellery that has been stolen from a house in Kilburn.

The burglars smashed a window at the back of the house and, once inside, stole a large amount of distinctive jewellery.

In particular a white faced gold pocket watch was stolen. The watch was on a gold chain that also included a dented gold vesta box – used to keep matches.

The watch included an engraving on the back of the watch, inside an opening on the rear, that reads: 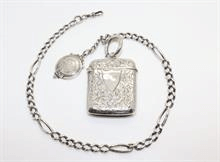 The watch belonged to the victim’s great grandfather and was of great sentimental value. The picture above shows a chain and vesta box similar to that which was stolen.

Also taken during the burglary was a gold bracelet made from a half albert pocket watch chain which has a Russian “KOPEK” coin inserted into it.

A further two antique silver vesta boxes, one embossed with a picture of a terrier dog and another engraved with a deer head along with pocket watch fobs engraved with the initials ‘KAH’, were taken.

Officers are appealing for anyone who may have seen these items for sale or been offered these items, particular a jewellers or pawn brokers, to contact them now using one of the following non-emergency contact methods.

Please quote the reference number 18000298278 and the name of the officer in the case PC 3227 Marceta-Cooper, in any correspondence.