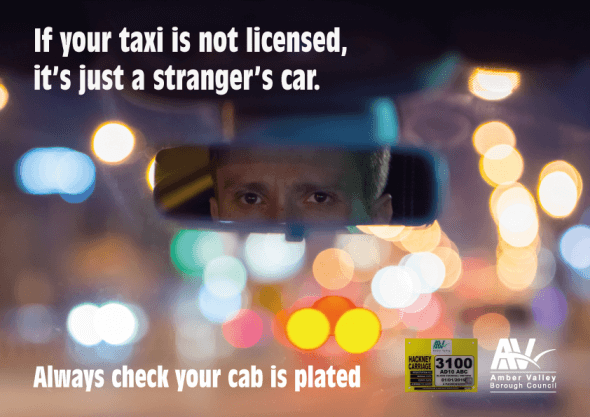 Reports of unlicensed ‘taxis’ operating in and around Ripley have prompted Amber Valley Borough Council to launch a safety campaign. The campaign is designed to raise awareness of the dangers of using illegal vehicles and shows how to identify the genuine operators. Although the focus is on Ripley the advice offered applies to anyone who needs to get home after a night out.

The Council’s Licensing Department has produced campaign materials including a series of posters. These will be displayed at late night venues around Ripley. The posters encourage taxi-users to be aware of the dangers of getting into a car with an unlicensed driver. The main message if that getting into an unlicensed taxi is unsafe and, in effect, is the same as accepting a lift from a stranger.

All licensed taxis display a plate at the rear of the vehicle giving a personal licence number. The driver of the vehicle will also wear an ID badge showing their photograph; this confirms that the driver has had thorough background checks to confirm their suitability for transporting members of the public. Before accepting a ride you should make sure that the taxi is licensed and that the driver is wearing an ID badge.

We are very concerned for the safety of young people who are using unlicensed taxis. We would also urge parents to check on how their sons and daughters are getting home and to help us pass on the safety-first message. Young people can be particularly vulnerable after a night out and so it is very important they make the right choices when deciding how they will get home.