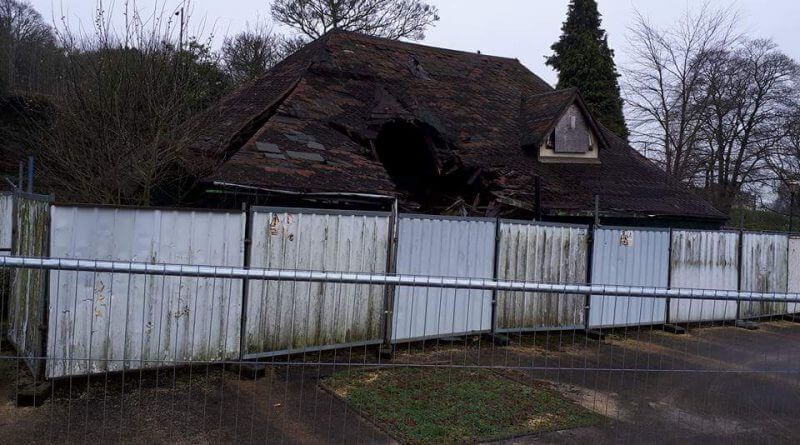 Amber Valley Borough Council have announced that work on a replacement for the derelict Swiss Tea Rooms in the Belper River Gardens is moving forward.

The issue was discussed at length at the Improvement and Scrutiny meeting on Thursday 6th June in the Council Chamber, Ripley. The meeting was chaired by Cllr Jack Brown.

Amber Valley Borough Council said they are “committed to delivering a new building which will be appropriate to the setting and history of the site and which will enhance the visitor experience.”

In March (21st) AVBC sought £290,000 for a proposed replacement to the Swiss Tea Rooms at Belper River Gardens. At the time their own consultant stated that a building on the scale of that proposed by the Belper Community Enterprise (CIC) was not “financially sustainable.”

The proposed AVBC scheme, which was called-in by Cllr Bellamy earlier in the year on the grounds that it would not be suitable for a World Heritage Site, would see the Tea Rooms being replaced with a smaller facility to that which has been previously been shown by the CIC group.

The AVBC report goes further to state that construction of the larger design as proposed by the CIC group “will in effect require a leap of faith by the Council, as it’s own independent expert advice has identified that a larger building is very unlikely to be financially sustainable and is predicated on unproven assumptions in terms of increased visitor numbers.”

The CIC stated: “At present we do not feel that the ADC report justifies a change in direction on our part, we are proceeding with submitting the planning application for the building as discussed to date and we will continue applying to grant making bodies to cover the funding gap.”

“The CIC has significantly developed the project and gained popular support through publicity, events and a substantial on-line following.”

At the meeting Cllr Atkinson stated that the work the Community Interest Group had done already on the Tea Rooms should be considered and that “they should be properly consulted with and the work that they had done should be respected.”

Members of the public, including Anne Sadler and Barry Rusdon, then spoke on the limitations of a kiosk, their frustration with years of failed proposals and need to have a fit for purpose building.

Cllr Bellamy argued that consultations had failed to take into account heritage partners such as the World Heritage Partnership or English Heritage or the council’s own heritage experts. His proposed alternative was to sell other assets with the intension of plugging the funding gap for the CIC scheme.

He added: “The way we are going, we are destined to have yet another failed scheme with inappropriate designs submitted. The fact that the leader of the council, Cllr Buttery, and the cabinet member for the environment, Cllr Short, were openly whipping the vote at a scrutiny meeting is disgraceful, and will be brought to the attention of the local government ombudsman.”

Belper Town Council said: “The Town Council wants to see a Tea Rooms built at the River Gardens. It considered the Borough Council’s intention to build a facility rather than lease the land to the CIC to build the facility and in light of this agreed to support the Borough with the £100,000 committed to the Tea Rooms project. It has amended the Grant Agreement to the CIC – so that the agreement only comes into effect if the Borough Council’s project fails. In essence the Town Council continues to support the facility with the £100,000 funding.”

The County Council will now use the Government’s Contracts Finder website to seek suitable companies that are interested in designing and building a new facility that is in keeping with its heritage setting, as soon as possible.

Speaking after the Scrutiny Committee, Cllr Chris Short, Cabinet Portfolio Holder for Environment said, “This delay of almost three months has been extremely disappointing and, in my opinion, unnecessary. I am relieved that we can now start to replace the derelict and collapsing Swiss Tea Rooms with a viable refreshments facility.

“The approval to procure a replacement building at a cost of up to £290,000 is proportionate in the light of the findings of the specialist catering consultant. By using ‘design and build’ we will keep costs as low as possible and hope to make up for lost time.”

As yet no plans have been drawn up or submitted to the council.