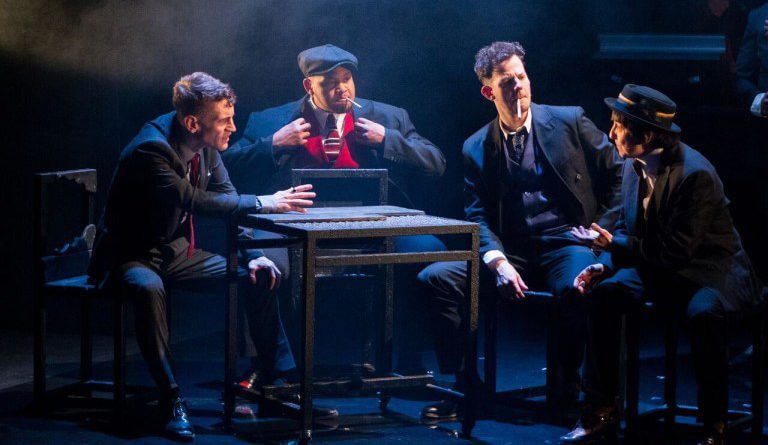 I went along to Derby Theatre unsure. After all Graham Greene’s novel, written 80 years ago, and the film starring Richard Attenborough are iconic. I needn’t have worried. This Brighton Rock is cleverly staged, beautifully lit, has an excellent soundscape and bristles with fine acting.

The plot revolves around the death of Fred who is murdered by 18year old gang leader Pinkie and his cohorts. The police believe he died from natural causes but Ida (Gloria Onitrini), who had met Fred briefly, believes there is something suspicious about the death. “I believe in right and wrong” is something of a mantra to the fun loving Ida.

When the sixteen year old waitress Rose falls head over heels in love with Pinkie she can’t or will not see that he despises her. She is unaware of Pinkie’s motives and that she is a threat to his freedom.  Early in their relationship they discover they are both ‘Roman’, an important religious aspect in Greene’s novel but less so in this version by Bryony Lavery.

Jacob James Beswick has a suitable strut and menace as Pinkie. Sarah Middleton is excellent as Rose with Gloria Onitiri’s ‘Ida’  a glorious creation.

Another standout performance comes from Chris Jack as Phil, a man who is never allowed to complete a sentence by the dominating Ida. It’s certainly a production that has its cast working hard as they take on multiple roles. In addition they become stage hands, shifting props throughout.

The staging by Esther Richardson is ingenious. On-stage musicians supply an undercurrent of percussive menace and Sara Perks’s design is a split-level affair that signify the iron pillars of Brighton Pier.  My only criticism was a lack of volume for the spoken word. At times it was difficult to hear the actors, but overall it was another fine night in Derby Theatre.

BRIGHTON ROCK runs until Saturday 19 May at Derby Theatre.