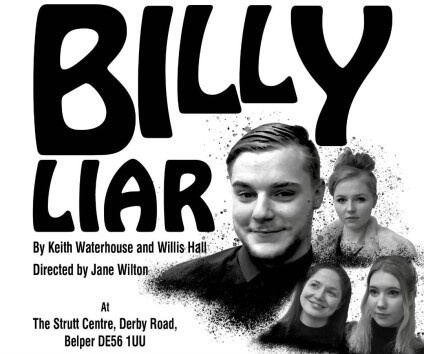 Ay up, welcome to 1950s Yorkshire.  Mind Granny as you find your seat.

The Belper Players have stepped up their already good game in the new studio space upstairs at Strutts.  The set (which was close to the original of living room, hallway and porch) was different to previous Belper Players sets and created a more professional expectation. The permanent lighting rigging made a noticeable difference and the staging was bang on.  The amount of detail applied to props and decor was impressive, from a teapot I recognised to old style food containers and the noticable presence of crochet.  I only noticed one anachronism. You’ll recognise this house.  You’ve been in it.  You’ve owned some of this furniture.  And Grandmother is there already as you are magically guided back through time and into this home you have known.  And now Mother is serving tea before we start. Lisa Benson is wonderful comic relief as Florence Boothroyd/Billy’s Grandmother.

The atmosphere is increasingly and relentlessly claustrophic.  An atmosphere given regular reprieve by well timed and acted comedy played razor straight by the majority of the cast.  The cast were all excellent but I found Mik Horvath as Geoffrey Fisher particularly impressive, in part because his mannerisms, attitude, posture and physical movement were exactly like my own Yorkshire Grandfather.  His performance was stunningly accurate for exactly this kind of man. And very funny.

The discontent and vitriol of the Fisher household is at times uncomfortable, which was the very well realised aim, but the audience laughed and laughed.  The cast make the audience invested in Billy’s escape and brilliantly convey this family’s classically English emotional incapacity to deal with real problems and desires by complaining about everything else.

Lou Jenkins is unnerving as overly eager to please Barbara and her on stage eating was eye wideningly impressive.  I hope she got free antacids. Brianna Undy plays the gobby lower class Rita to perfection and Mollie Middleton’s performance and costuming for Liz explains her character without any need for exposition to contradict the opinions of everyone else in the play.  Verna Bayliss as Alice Fisher was believably emotional. Joseph Riley played Billy Fisher melodramatically, which worked to explain the reactions of others to him.

It’s a smaller cast than is usual for the Belper Players but they made use of those not used on stage with a journey back in time as you walk along the balcony and into the studio, along with interval entertainment in the new bar area of fictional bands and a compere all appropriate to the time setting of the play.