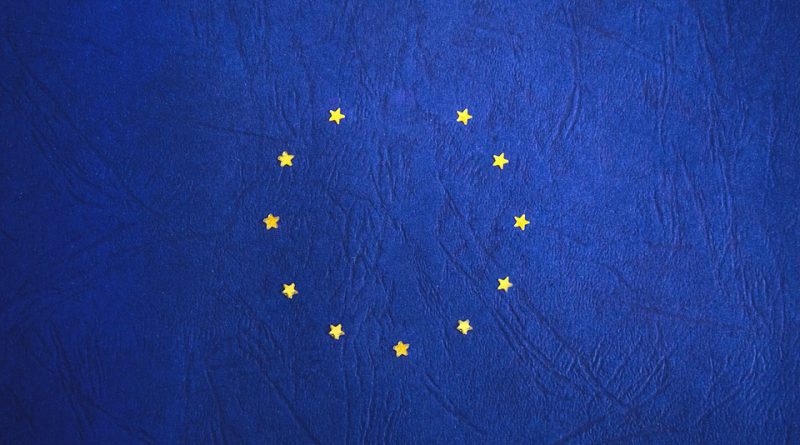 Reading Pauline Latham’s answers to the Nailed Brexit questionnaire reminds me of that old saying, “never allow politicians to play with scissors, matches or statistics.”

Latham ignores the fact that 1.0% is actually the number of people claiming job seekers allowance, a benefit for which many unemployed 16-64 year olds are deemed ineligible.

If we add in those who are sanctioned, in receipt of other types of benefits, have savings or private pensions above a certain (yet very low) monetary level then the true number of unemployed is 4.2%. The really disturbing number is the 11.1% of young people in the East Midlands not in education, employment or training (NEETS, 16-24 age group). She also conveniently ignores the fact that the number signing on for job-seekers allowance in Amber Valley grew by over 10% between 2016 and 2017 – yes, following the EU referendum vote.

As she says, her government is happy to continue with this downward spiral.

What Phillip Hammond actually said in his Autumn 2016 statement was, in the next 6 years to 2022: “Britain will borrow an extra £122bn – of which almost £58.7bn is a black hole opened up directly because of the uncertainty created by EU withdrawal. Of that £58.7bn, some £16bn would be caused by lower immigration, the OBR said, because an influx of migrants would have delivered an economic boost.”

Hammond is at least honest as he has admitted the reality of Brexit, lower economic activity resulting in less tax take for the government. His answer is to continue with austerity cuts and increase borrowing. Remember that in 2010 the Tories promised to balance the budget by 2015 but now the forecast is 2025 – or sometime after that.

Ah yes, integrated supply chains function best in integrated markets. Withdraw from that market and the complexity of tariffs and customs multiply exponentially. The Port of Dover has forecast daily tailbacks of lorries of 20 miles if the time taken to process paperwork increases by even 2 minutes per truck. So, supply chains become extended and the threat of import and export tariffs can have a devastating effect on costs which makes UK produced vehicles uncompetitive against foreign competition.

New car registration has fallen in the UK by over 15% in the past year as the uncertainty of Brexit coupled with the diesel fuel scandal play out in the economy. As for export/import, the following graphic illustrates the complexity of UK automotive supply chains – the future is very uncertain: 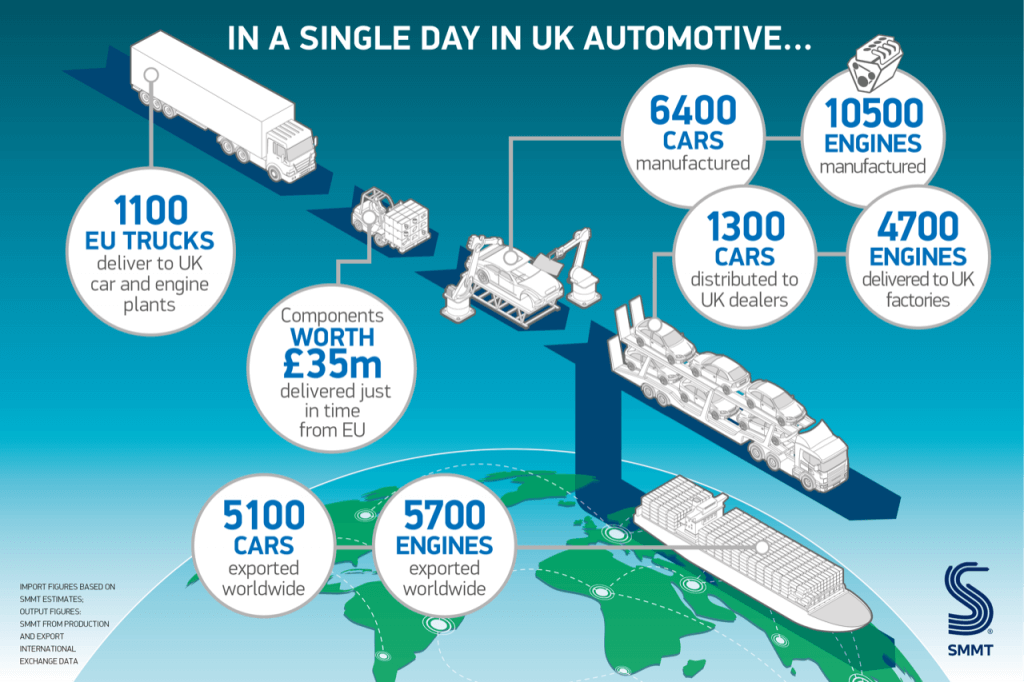 If Korea and countries like it are to be our new trading targets then our future looks very bleak. Trade with Korea increased in 2011 following a free trade agreement with the EU. An investigation by the London School of Economics concluded that it would not be in Korea’s interest to extend the EU free trade agreement post Brexit with the UK.

The same argument holds true for many of the 50 countries that have similar agreements with the EU which could result in a significant loss of trade for the UK. So, nigh on 2 years after the EU referendum and 1 year away from leaving the EU in March 2019 we have not secured a single alternative trade deal – oh except for the contract brokered by Greg Clark with the French and Chinese where we agree to pay them £18 billion to build a nuclear energy plant at Hinkley Point and then pay well over double the market rate for the electricity that it produces. I think that Latham’s trust in Greg Clark is misplaced.

We are back to the scissors, matches and statistics thing again. Latham once again promoting statistical falsehoods with her claim that the number of EU nationals in the NHS has increased since the referendum. Her figures come from a House of Commons Library Briefing Paper Number 7783, dated 7 February 2018 which states that:

“Data coverage of NHS nationality data has improved over time. Because of this, comparisons of the number of EU staff in the NHS over time should be made only with caution. In June 2016 there were 89,546 staff with unknown nationality. That has now decreased by over 10,000 to 78,269, while the total number of staff has increased. This means that some apparent increases in staff numbers for particular nationalities and nationality groups is likely to be due to improved data coverage rather than genuine increases. The data shows that there were 58,698 staff with recorded EU nationality in June 2016 and 61,974 in September 2017. But to present this as the full story would be misleading, because we know that there are over 10,000 more staff for whom nationality is known now than in 2016. One way to partially account for this is to present the number of EU staff as a percentage of all staff with a known nationality. This measure suggests that EU staff has changed little since the referendum, from 5.5% to 5.6%.”

“Claims about changes in the number of EU staff which don’t account for the importance of ‘unknowns’ should be regarded with due scepticism.”

The reality is that more EU national nurses and doctors are leaving the NHS than are being recruited following the Brexit vote. The NHS is crippled by staff shortages and the Leave vote has only made things worse. Latham accuses Remainers of ignoring facts but she herself is selective to the point of misleading. In 2013 the House of Commons

“Public Administration Select Committee (PASC) concludes, despite the positive steps implemented by the Statistics and Registration Service Act 2007, there remain issues and concerns about the way government statistics are produced and disseminated which remain a genuine risk to public confidence in the statistical system and must be addressed.”

Yes; I agree, 80% of UK environmental legislation originates from the EU but assurances that these laws will continue to be in force following Brexit are somewhat hollow.

Andrea Leadsom, when she was Secretary of State for Environment, Food and Rural Affairs (DEFRA) (and who, before she was appointed, was a prominent LEAVE campaigner), gave evidence to the Commons Environmental Audit Committee that copying up to a third of EU environmental legislation will simply not be possible because there will be no UK bodies in place to apply or enforce the legislation.

Michael Gove has subsequently replaced Leadsom and he now proposes to consult on the terms of reference of a future consultation regarding the setting up of an overarching UK environment agency (notice that this is talks about talks with no idea when they will start or finish – this is the reality behind the 25-year plan for the environment). Setting up an oversight agency for environment and climate change obligations (as with many other sectors which currently have pan-EU agencies ensuring rules are applied and standards met) will be costly and time-consuming and will essentially duplicate the work that is already being done by the European Environment Agency (EEA). I have so far counted 42 EU agencies (and still counting) that we will either have to duplicate or pay to remain in as members even as we leave the EU.

To take one specific issue that is crucial for global warming the EU is already concerned about; how to respond if Brexit takes the UK out of the EU Emissions Trading Scheme (ETS). The UK was a pioneer of this ‘cap and trade’ scheme for controlling and eventually reducing carbon dioxide emissions, and UK businesses have invested in implementing the system which rewards greener technological solutions and restricts imported heavy goods with high carbon content (such as Chinese steel) from entering the single market. The EU is concerned that if the UK leaves this successful scheme, the British may sell off all of their allowances back into the market and depress the price of carbon in the EU, reversing the progress already made. EU institutions are already looking at supporting new wording designed to prevent this – another aspect of Brexit of which the UK government seems either unconcerned or unaware.

In answering this question I have demonstrated a similarity between Pauline Latham and myself – we have both only scratched the surface.

Poor old Phillip Hammond will have to do an awful lot to maintain our standard of living. I can understand Latham avoiding a direct answer because she has no doubt once again read a House of Commons Library Briefing Paper ‘Living Standards and Inequality’ dated June 26th 2017.

The paper cites poor pay and low productivity as the key suppressors of living standards. Hammond has admitted that Brexit adds an extra burden of fiscal restraint so for the impoverished and those of more modest means the outlook is bleak.

We have lost our position at the head of the G7 economic growth table and since Brexit we are now placed bottom. We have slipped in the world rankings from being the 5th largest economy to the 6th. The productivity of our workforce, which slipped badly following the credit crunch has shown no signs of improvement; outstripped by our competitors in Europe who go from strength to strength.

The government derives 22% of its income from the finance centre that is the City of London yet the top finance houses have moved 11% of their workforce to competing financial centres in Europe following the Brexit vote. (4,650 positions moved away out of 46,000) and this trend is still continuing as institutions brace themselves for the downgrading of the City of London as a global player.

If there was even one economic indicator that pointed to a net gain following Brexit that would in any way improve the standard of life then I would highlight it. Unfortunately, I can find none and from her answers I don’t think that Pauline Latham has been any more successful.

Will Brexit improve the standard of living in the UK? On the evidence so far – NO.

4 thoughts on “Opinion: “Never Allow Politicians To Play With Scissors, Matches Or Statistics.””