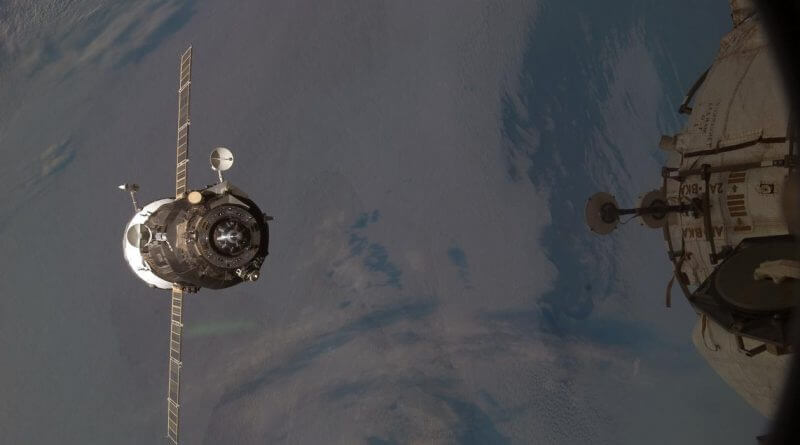 In the April Night Sky: Jupiter, Mars and Saturn are all visible but are low in the sky. Venus becomes more prominent as the month progresses. The Lyrids Meteor Shower peaks in the early hours of the 22nd of April. Early in the month it may be possible to spot the cargo vehicle PROGRESS as it follows the Space Station.

Meteor showers are annual events occurring as the Earth moves through the debris left behind by comets and (sometimes) asteroids. Our last meteor shower was in early January (the Quadrantids). Now, after a short break, we start the cycle again with the Lyrids.

The Lyrids pass through the debris left behind by Comet Thatcher – last seen in 1861 and not due another visit for another 258 years. They are classed as a moderate meteor shower and, at their peak, produce 18 meteors per hour.

Lyrids are fast moving and can leave glowing trails. You will need to stay out a long time to see one. They appear from all parts of the sky, so just look up to see them.

The Constellation of Leo the Lion.

April is a good time to try and spot the constellation of Leo. You can use the pointer stars in the Plough as a guide (see the animation here: Finding Leo). Look towards the south for the pattern of stars known as the Sickle, it looks like a backwards question mark. The bright star Regulus is at the bottom of the Sickle. From here you can trace out the body of the Lion (it does actually look a little bit like a Lion) See a star map here: Leo the Lion.

If you have a telescope the star, Algieba, (at the base of the Lion’s “neck” and the second brightest star in the constellation) will resolve into an impressive double star. A harder challenge is to locate the galaxies M95 , M65 and M66 by using the stars of Leo as a marker.

Jupiter rises in the southeast about 3 hours after sunset and towards the end of the month even earlier. It is low in the sky so may be hard to see if your horizon is obscured. Look out for it on the 30th of April when it will be close to the full Moon.

Mars rises in the southeast at around 2.00am. Mars is nicely paired with Saturn and both planets are shining brightly. However, they are very low in the sky – making observation difficult for those of us without a clear horizon.

Venus is the most visible planet this month. At the beginning of the month it rises low in the west just after sunset. It will increase in elevation throughout the month, by the end of April it will be a prominent “evening star” and will be easier to see. On the nights of the 17th and 18th it is close to the crescent Moon, look out for another pairing with the Moon on the 24th.

The Spot the Station site is currently showing viewing opportunities from the 6th April – 10th of April. ISS appearing in the evening in time slots between 8.24pm and 10.00pm.

The site is also showing viewing opportunities for the PROGRESS cargo vehicle that supplies the space station (image above courtesy of NASA images). I am not sure if PROGRESS is a naked eye object, I have failed to spot it on previous occasions, however I am willing to give it another go (with binoculars at hand this time). PROGRESS can be seen any evening between the 6th and 9th of April, in time slots between 8.49pm and 9.44pm.

Both objects will be in the sky for less than 5 minutes. To make sure of a sighting go to the Spot the Station website for the exact times and where to look in the sky.

Derby And District Astronomy Society: A Guide to The April Sky.

The Derby and District Astronomical Society have regular “Introduction To Astronomy” evenings. This month’s presentation will be about “The April Sky”. The evening will be held on Friday 20th April from 7:30 pm onwards at The Friends Meeting House, St. Helens Street, Derby, DE1 3GY.

There is a collection which helps pay for the rental of the Friends Meeting House which is £1 for members and £3 for non-members. If you would like more details please email the DDAS Secretary, Brian Dodson via: secretary@derbyastronomy.org