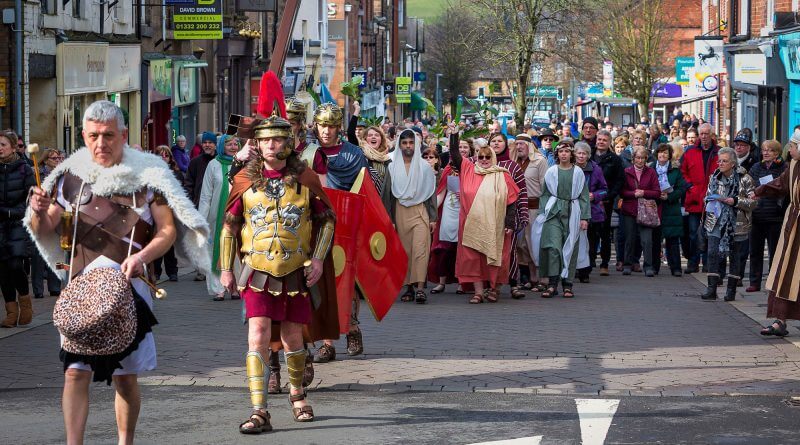 After an absence of three years, The Belper Passion returned to the streets and churches of Belper, attracting a capacity audience to St. Peter’s church on Good Friday.

The community event told the Easter story through 120 actors, musicians and singers.

The Belper Passion was a combination of drama and music, featuring a play by George Gunby, directed by Jannice Richthof, excerpts from ‘This Man Oratorio’ written by Derby based composer Anne De Waal and performed by the This Man Chorale.

A third component was the ‘Churches Flash Mob,’ led by Alex Lamb, that opened and closed proceedings.

The day began with the Walk Of Witness, led by a drummer and Roman soldiers. It was estimated that over 400 people made the walk along King Street and Green Lane before arriving at St. Peter’s Church.

“It was a privilege to see the Passion come together,” said writer and co-producer George Gunby.

“Everyone worked exceptionally hard over six months and the result was a triumph of community cooperation.”

Rev. Anne Stratton said: “The resurrection of Jesus brings peace, hope and forgiveness to all who trust and believe. So let’s not stop with a dramatic production but have the courage to meet with the risen Lord and let him change us.”

Supported by The Passion Trust