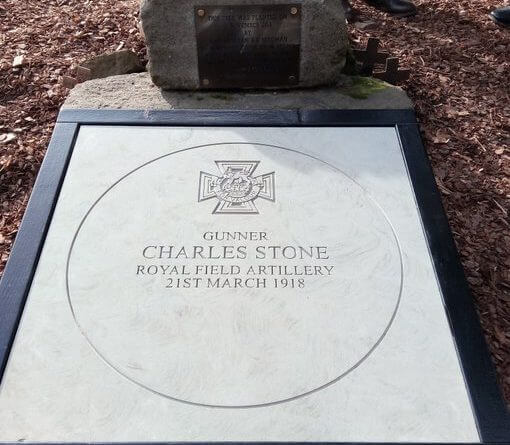 A day of remembrance celebrations has taken place on March 21 in Belper on the centenary of Charles Edwin Stone being awarded the Victoria Cross.

Decendents of Charles Stone, Mr Robert Hunt and Michael Hall unveiled the paving stone which had been set in a flower bed in the Memorial Gardens on King Street, Belper.

The unveiling was accompanied by Derwent Brass.

The day, organised by Belper in War Time Group – also included a service the Chapel at Belper Cemetery and a blessing of Charles Stone’s grave and in the evening, a celebration of Charles stone’s life at St Peters Church.

Bells were also rung at the church in the morning to commemorate the life of the World War 1 hero.

Charles Edwin Stone was born at Street Lane, Denby in 1889. He was one of thirteen children and the family moved to Belper in 1894. Charles was a pupil at the Pottery School and he worked as a coal hewer at Denby Colliery. He joined the Royal Artillery in 1914.

Stone died in 1952 in Derby where he had worked for Rolls Royce. He is buried in a family grave in Belper cemetery.

March 21 marks a hundred years since he was awarded the Victoria Cross and whilst he returned home to Belper many young soldiers from the town were not so fortunate.

As part of the remembrance of the sacrifice of the First World War, The Department of Communities and Local Government (DCLG) has provided Commemoration paving stones to be laid in honour of Victoria Cross recipients over the four-year period of the 100th anniversary to remember the act of valour which led to the award.