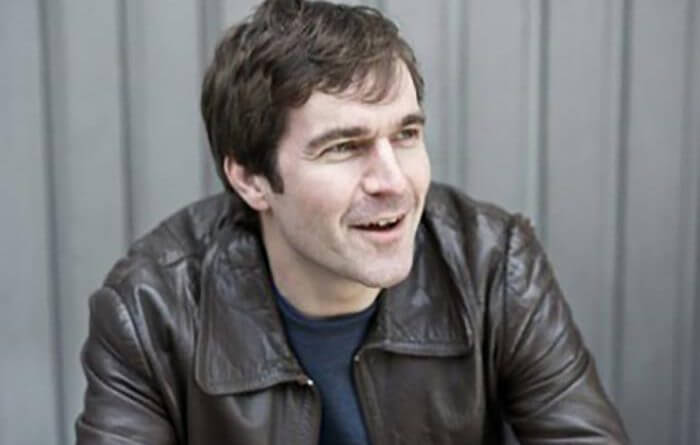 Mark Morriss is a singer songwriter who famously made his name fronting English indie outfit The Bluetones. Mark fronted the four piece over a successful and fruitful 15 year period, scoring 14 top ten singles and 3 top ten albums, whilst touring the UK, Europe and Japan, before temporarily disbanding in 2011.

As a solo artist he released ‘Memory Muscle,’ ‘A Flash of Darkness’ and most recently ‘The Taste of Mark Morriss’ in 2015.

At the same time as producing and touring his own solo material, Mark has produced Theme and Chapter music for the audio versions of David Walliams’ successful series of children’s books, from ‘The Boy in the Dress’ right through to his latest, ‘The Midnight Gang’, all released on Harper Collins.

Since 2013 Mark has also been a member of Acid Jazz label-mate Matt Berry’s touring band The Maypoles.

Tell us a bit about what you’re up to at the moment?

MM: At the moment I’m in the midst of a non-stop, ever-rolling solo tour. I play about three acoustic shows a week around the UK. However, I’ll be hitting the road with The Bluetones in May for our first tour in two years.

Belper has a surprisingly rich music scene for a small town, so I have to ask, what advice would you give to artists trying to break through?

Cast your mind back, how did it feel when The Bluetones got signed to A&M?

MM: More than anything we felt excited at the prospect of having the means to record and share our songs. Signing with A&M was the beginning of the journey as far as we were concerned.

Following on from that how do you feel about the music industry these days, is it completely different?

MM: The music industry is constantly in flux, it’s always gone hand in hand with the new technology that evolves around it.

The challenges a new artist faces in 2018 are completely different from those we would have come across when we were starting out. The internet and smart phones have changed the landscape forever.

Do you think people look at the Britpop era through rose tinted glasses or was it genuinely something unique?

MM: With every passing year it appears to have more and more relevance, in as much as it holds up a mirror to the lack of any kind of cultural youth movement to have emerged since.

What’s the process like when you are scoring audiobooks?

I saw you play with Matt Berry’s band a few years back at the Rescue Rooms. How did you meet Matt and how is playing with his band different from playing with the Bluetones/Solo?

MM: We met at a mutual friend’s comedy show about 9 years ago, and just kinda hit it off. He had a radio show at the time and I appeared as a guest. He’s very passionate about music, and so it was inevitable that at some point we’d mess about in some way. When I got the chance to play with The Maypoles I jumped at it. It’s nice to let somebody else take the spotlight, and just groove away in the shadows.

Mark Morriss will be performing at The George and Dragon Belper on March 31st with support from Adam Collins from 8.30pm.

The event is a fundraiser for the National Autistic Society organised by Node56 as part of their Live Music Lock-Up series of live gigs.