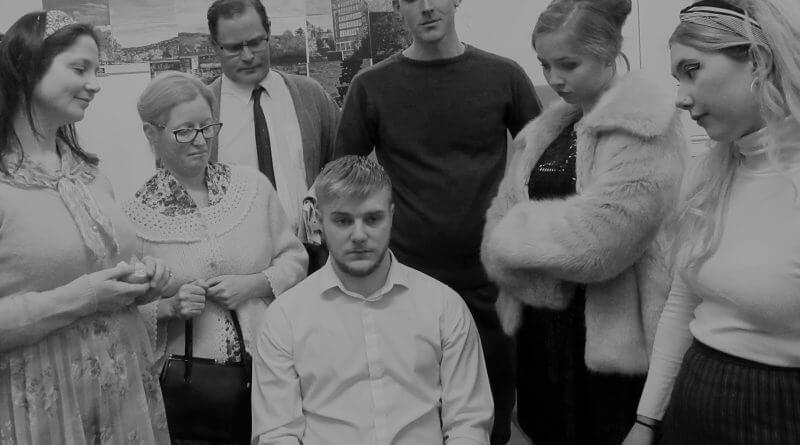 Belper Players are reviving a classic British comedy from the Sixties at the Strutt Centre in Belper from 18th to 21st April.

Billy Liar is the stage adaptation of Keith Waterhouse’s famous novel, telling the story of Billy, a young man who turns to fantasy as he dreams of breaking away from his working-class northern roots.

A clerk in an undertaker’s office, Billy dreams of moving to London and becoming a comedy writer. His life becomes hilariously chaotic as his flights of fancy lead him into all kinds of trouble, not least becoming involved with three different women at once – homely Barbara, demanding Rita and free spirit Liz.

Belper Players have staged Billy Liar before, with a young Timothy Dalton playing the title role, but this version will be a new take on the classic story.

Director Jane Wilton has been inspired by the music of the times and says that all may not be as it appears in her production of the play.

She says: “It’s almost as if Billy sees himself as the scriptwriter and he’s written all these characters – like his parents – into his story. Maybe some of the people the audience see will be figments of his imagination.

“It’s going to be a great night of entertainment and it’s lovely being able to give some of the younger members of Belper Players the chance to take centre stage, like Joe Riley who plays Billy, Brianna Undy who plays Rita, and Mollie Middleton who takes on the role of Liz.”

Members of the audience are invited to get into the mood of the late 1960’s by dressing in the style of the times.

Billy Liar, by Keith Waterhouse and Willis Hall, is at The Strutt Centre, Derby Road, Belper DE56 1UU, from 18th to 21st April. Performances are at 7.30pm with a matinee performance on the Saturday at 2.30pm.