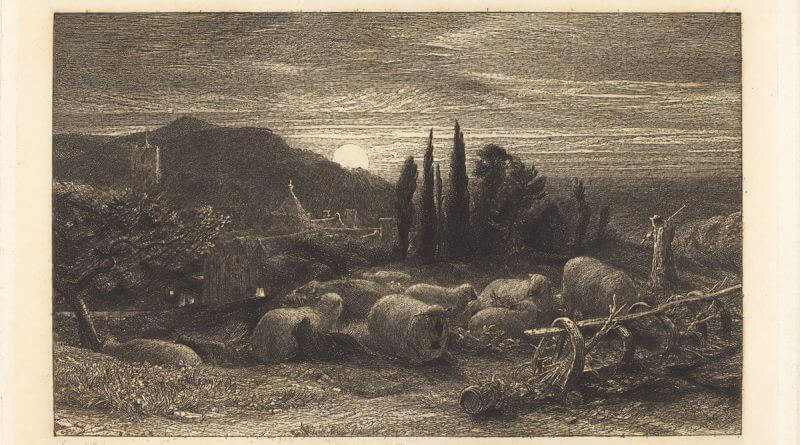 In the night sky over Belper, Venus appears low in the twilight sky this month, pairing with Mercury on the 3rd. The vernal equinox marks the first day of spring. Jupiter, Mars and Saturn are all visible – although you will have to stay up late, or get up early, to see them. There is a Blue Moon on the 31st.

Another Blue Moon: 31st of March.

Blue Moons normally appear about once every two to three years, but 2018 is a special year with two blue Moons occurring just two months apart – the last one was in January.

The Mountains of the Moon.

The full Moon is a glorious sight (see the image above, The Rising Moon by Samuel Palmer, courtesy of the Washington NGA archive) however, most observations are better when the Moon is in shadow.

You will notice that different features are highlighted as the Moon goes through its phases. For example, when there is a half Moon it is easier to see the mountains and mountain ranges that cluster around the Mare Imbrium.

The Mare Imbrium (or the Sea of Showers) is the large lava plain within the Imbrium basin. Caused by a mighty collision, the Imbrium basin has a diameter of nearly 711 miles across. It can be easily located, lying between the craters of Plato and Copernicus.

Mountains on Earth are caused by tectonic or volcanic activity; however, the Moon’s mountains are the result of impacts on the lunar surface. As such, it is not surprising that the biggest concentration of mountains are found around the large impact crater that forms the Imbrium basin.

You will need a telescope to spot the mountains. There is a good guide here, downloadable as a pdf  (Majestic Mountains).  The Sky at Night website also has a section on the Mountains of the Moon: Pete Lawrence’s Moon Guide: Section 4.

A target worth looking for is the shadow formed by the lone peak of Mons Piton. This mountain is about 1.4 miles high and sits in the top quarter of the Mare Imbrium. When the conditions are right, Mons Piton’s shadow can be seen stretching across the plains of the Mare Imbrium. You will need a telescope to see the shadow. Try to see if you can find it by looking at the half Moon on the 8th and the 24th of March.

The image here: The Moon at Third Quarter will give you an idea of what to look for. Check out the top of the image to spot Mons Piton and its shadow.

Jupiter is a bright object rising at about midnight. Look towards the south-east to see it. The Moon is close to Jupiter on the 7th of March.

On the 10th of March a waning Moon will be close to Mars and on the 11th it will pass close to Saturn.

Venus is visible low in the west just after sunset. The only problem is that you will need a low and unobstructed horizon to see it. Start looking about 45 minutes after sunset – it will be the bright twilight star low in the sky. On the 19th it will be below a thin crescent Moon.

If you can spot Venus you may also be able to spot Mercury – much fainter but nearby. On the 3rd of March they are very close (apparently next to each other). Start watching around 20 minutes after sunset to catch this.

The Spot the Station site is currently showing viewing opportunities from the 2nd March – 15th of March. ISS appearing in the early morning in a time slot between 3.29am and 6.01am.

A Sense Of Proportion: The Total Perspective Vortex.

Last month’s article celebrated Carl Sagan’s “Pale Blue Dot” speech. It has to be noted that Douglas Adams also touched upon this subject – with a slightly different conclusion. This is a nicely animated clip from the second series of the Hitchhiker’s Guide to the Galaxy.