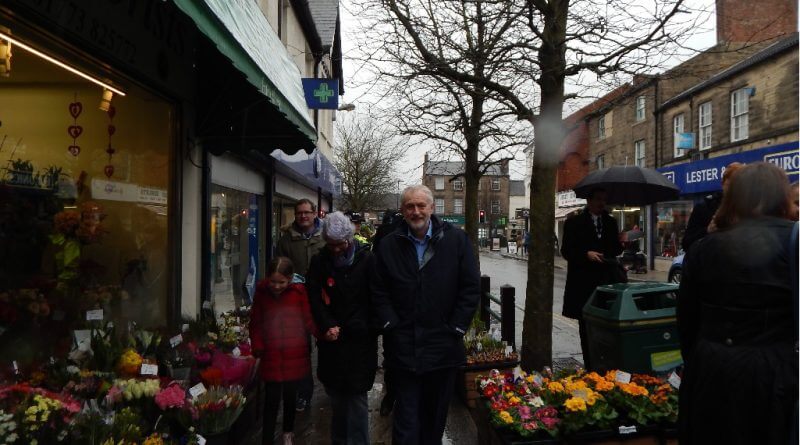 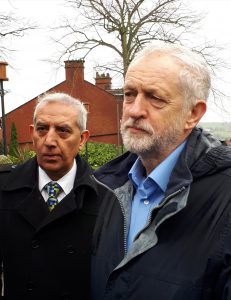 Jeremy Corbyn visited Belper today at around 1pm with our Police and Crime Commissioner Hardyal Singh Dhindsa and local Labour councillor Ben Bellamy.  Mr Corbyn was affable as he met with excited locals and had photos taken with them.  He also visited a number of local businesses.  Mr. Corbyn also stopped by the Save Our NHS petition opposite Poundland, which collected about 400 signature today, and admired the work that had gone into the handcrafted Belper and Duffield Labour Party banner.

Some members of the public commented that his police escort was the first time that they seen police in Belper in a long time and this is actually the reason that Mr. Corbyn was visiting the area.  The Police and Crime Commissioner for Derbyshire, Hardyal Singh Dhindsa, wants to see more community policing as budget cuts have reduced police presence to response only in areas outside the city of Derby.  Mr. Corbyn was here today to support this.

Mr Corbyn said, “The police have had their budgets cut, therefore the police numbers on the street have been affected and people begin to see it.  Unless we press this issue…we need particularly PCSOs on the street. Every Chief Constable is telling me they’ve got problems.  They’ve tried to stretch their budgets out.  Whilst we’ve coped with the awful events in London Bridge and Manchester over the summer, that dragged in police from everywhere, including Derbyshire, we can’t go on like that.  We’ve got to fund the police properly otherwise people’s security is compromised.”

On the issue of spending the reserves of police funding, as was included in the Police and Crime Commissioner’s budgets (as decided by the Conservative government), Mr. Corbyn said, “Well building up reserves is good practice in general because clearly you should have a reserve against unforeseen expenditure.  Emergencies might happen.  So inviting people to spend reserves really takes the government away from its responsibility to provide the money that is necessary for police forces all over the country.”

He added, ” The Police force do a great job; the problem is that Derbyshire has been underfunded and cannot go on forever paying local police forces by raising police severence.  It’s got to be paid for nationally and centrally, because Derbyshire is obviously an important part of the country.  When the terrible events happened in Manchester in the summer, Derbyshire officers went to help and support.  That’s how it should be, but they need to be properly funded.”

2 thoughts on “Jeremy Corbyn was in Belper Today”