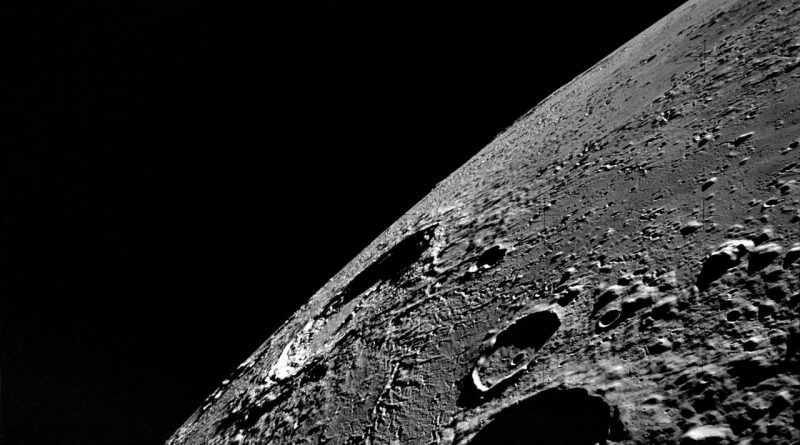 No bright planets in the evening sky this month, but we can enjoy views of Jupiter and Mars if we are prepared to get up early. The blue Moon on the 31st of January is also a supermoon.

The full Moon on the night of the 31st January is designated a blue moon (and is also a supermoon – see December’s Space is the Place for more about supermoons). A blue moon occurs when two full Moons appear in the same month. It has no astronomical significance – but expect to hear a lot about it as the event approaches. This full Moon also occurs at the same time as a lunar eclipse – but unfortunately this will not be visible in the UK.

The blue moon gets a lot of kudos for inspiring the classic song. Here is a version by Herbie Gray and Rudies:

The Craters of the Moon.

The craters of the Moon are easier to see in detail when the Moon isn’t full. This is because craters show up better when when they are close to the shadow line (or terminator) that forms the boundary between the dark and light regions on the face of the Moon. With a pair of binoculars it is easy to spot the main craters, and on the 26th of January the terminator line will be close to the prominent craters of Tycho and Copernicus. See a guide here: Location of Tycho and Copernicus.

The craters of the Moon are caused by the impact of asteroids or meteorites crashing into its surface. The impact craters of Copernicus and Tycho are relatively young. Tycho’s crater being the result of an impact made about 108 million years ago.

When the Moon is full you will notice the bright “rays” emanating from Tycho and Copernicus. The rays are formed by the debris ejected from the craters at the time of impact. These rays fade over time and, as such, they are an important indicator of the age of the Moon. See here for more detail: The Copernicus Crater and the Lunar Time scale

The Spot the Station site is currently showing viewing opportunities from the 8th – 14th of January. ISS appearing in a time slot between 4.42am and 7.20am. On the 8th, 10th, 11th and 12th of January ISS can be seen twice, separated by about 95 minutes.

Before the internet there were 2 main sources of information for the casual astronomer: The Sky at Night and the monthly Starwatch, Night Sky column in the Guardian written by Alan Pickup. In January’s Starwatch column, Alan announced his retirement after 43 years. Alan was able to present information simply, concisely and objectively, a feature of the column being 2 diagrammatic star charts: looking South and looking North. It was always a pleasure to find Starwatch in The Guardian, and Alan’s contribution to it will be missed. The Guardian promises to continue coverage of astronomy and is passing the Starwatch column onto the astronomy journalist, Stuart Clarke. Hopefully the high standards set by Alan Pickup will be maintained.

Introduction to Astronomy: “How To Use That Telescope You Got For Christmas.”

The Derby and District Astronomical Society hold regular “Introduction To Astronomy” evenings. This month they will be giving advice on “How to Use That Telescope You Got For Christmas”. The evening will be held on Friday 19th January 2017 from 7:30 pm onwards at The Friends Meeting House, St. Helens Street, Derby, DE1 3GY.

There is a collection which helps pay for the rental of the Friend’s Meeting House which is £1 for members and £3 for non-members. If you would like more details please email DDAS Secretary Brian Dodson via: secretary@derbyastronomy.org