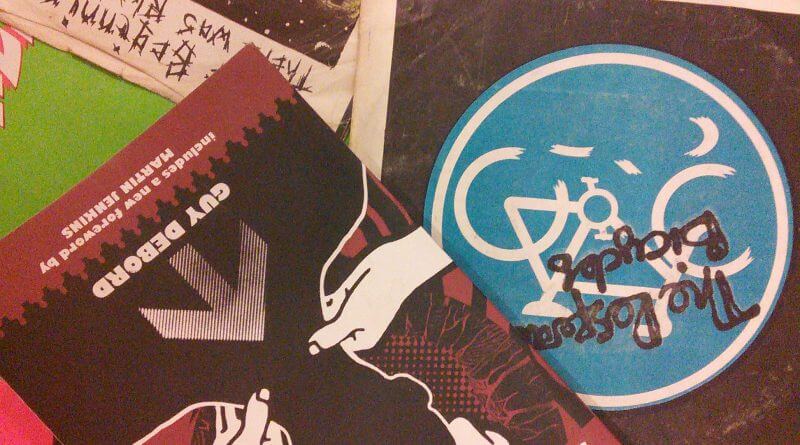 I recently found Guy Debord’s situationist tract “Society of the Spectacle” nestling in the classics section of a local charity store. I thought it would be fun to match up some quotes from the book with music selections from 1977.  In doing so I hope, 40 years on, to have captured something of the spirit of that year.

Although 1976 has been deemed the official birthday of punk rock, 1977 was the year that punk exploded into the consciousness of the innocent passer by. Punk itself was short lived as a phenomenon and quickly became formulaic. Once that happened it seemed to lose its point and other forms of music established stronger foundations in that year. In particular dance music and New Wave / Post-Punk. More importantly, musicians realised they could make, produce, and distribute their own music without the need of major label recording contracts. Freed from these restraints pop music was redefined and democratised. For a brief period, anyone could do it, anyone could join in, anyone could rip it up to start again…

All quotes are taken from “Society of the Spectacle” by Guy Debord. All music selections are from 1977.

“In societies dominated by modern conditions of production life is presented as an immense accumulation of spectacles. Everything that was directly lived has receded into a representation.”

“The reigning economic system is a vicious circle of isolation. Its technologies are based on isolation, and they contribute to that same isolation. From automobiles to television, the goods that the spectacular system chooses to produce also serve it as weapons for constantly reinforcing the conditions that engender “lonely crowds.” With ever increasing concreteness the spectacle recreates its own presuppositions.”

“The alienation of the spectator, which reinforces the contemplated objects that result from his own unconscious activity, works like this: The more he contemplates,the less he lives; the more he identifies with the dominant images of need, the less he understands his own life and his own desires. The spectacle’s estrangement from the acting subject is expressed by the fact that the individual’s gestures are no longer his own; they are the gestures of someone else who represents them to him. The spectator does not feel at home anywhere because the spectacle is everywhere.”

“The ruling totalitarian-ideological class is the ruler of a world turned upside down. The more powerful the class, the more it claims not to exist, and its power is employed above all to enforce this claim. It is modest only on this one point, however, because this officially nonexistent bureaucracy simultaneously attributes the crowning achievements of history to its own infallible leadership. Though its existence is everywhere in evidence, the bureaucracy must be invisible as a class. As a result, all social life becomes insane. The social organization of total falsehood stems from this fundamental contradiction.”

“Ideas improve. The meanings of words plays a role in that improvement. Plagiarism is necessary. Progress depends on it. It sticks close to an author’s phrasing, exploits his expressions, deletes a false idea, replaces it with a right one.”

“But the object that was prestigious in the spectacle becomes mundane as soon as it is taken home by the consumer – and by all its other consumers. Too late it reveals its essential poverty, a poverty that inevitably reflects the poverty of its (mass) production. Meanwhile some other object is already replacing it as representative of the system and demanding its own moment of acclaim.”

That said, all that was ever needed in 1977 was 3 chords and a DIY attitude.

If you understand, go and join a band…