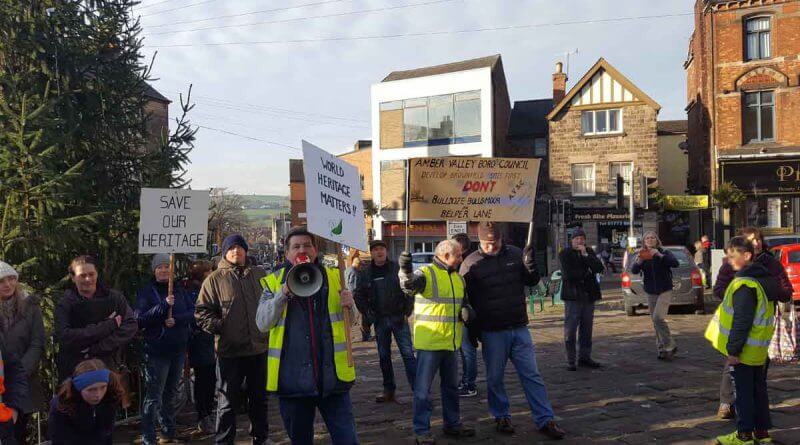 Over a hundred protestors marched through Belper town centre to campaign against the approval of developments which could potentially threaten Belper’s world heritage status.

Many Belper residents fear for the future of the towns vital World Heritage site status as increasing amounts of applications are submitted or re-submitted to Amber Valley Borough Council for approval.

“The WHS (World Heritage Site) is very important to us, it is the jewel in our crown. We are trying to raise awareness of the WHS and its significance in the whole of the Derwent Valley.

“We are having to meet with an obstinate planning authority who just don’t seem to recognise the importance of its (the WHS) role.

“We are going to walk through Belper today and tell people what we are about and explain to people how we feel and how angry we are.”

There are currently three planning applications for the Bullsmoor, Belper Lane and Bessalone areas being processed that could, should they be passed, add hundreds of new houses to the town.

Helen Jackson said: “We are protesting because we have got to the point where the Amber Valley planning department are actually starting to recommend now development of the WHS. There seems to be an argument within the planning board and department that the landscape isn’t anything to do with the WHS: it’s just the setting.

Protect Belper, a community group who have been contesting development for 4 years, were also in attendance. David Clark, from the group, said: “We all want the same thing, we all want to protect the heritage. There are three sites at the moment with planning applications.”

Speaking about the fatigue of having to deal with so many applications, he said: “It’s really hard I think, it started in June 2014 so now we are three and a half years on…It’s just a constant battle, and I suspect that the people who put in these applications know this.”

Fay Atkinson recently said, in an opposition letter on the Bessalone development, that: “Affordable housing is needed in the town, many brownfield sites have been identified in the draft Belper Neighbourhood Plan and these should be utilised and prioritised.”

Nailed recently reported that the Wheeldon Brother’s Belper lane application for 118 houses was turned down, however a further application was resubmitted for 65 houses in the same place.

Meanwhile, the Bessalone application for 185 houses within the Derwent Valley Mills World Heritage Site buffer zone, is expected to be decided on within the next few weeks.