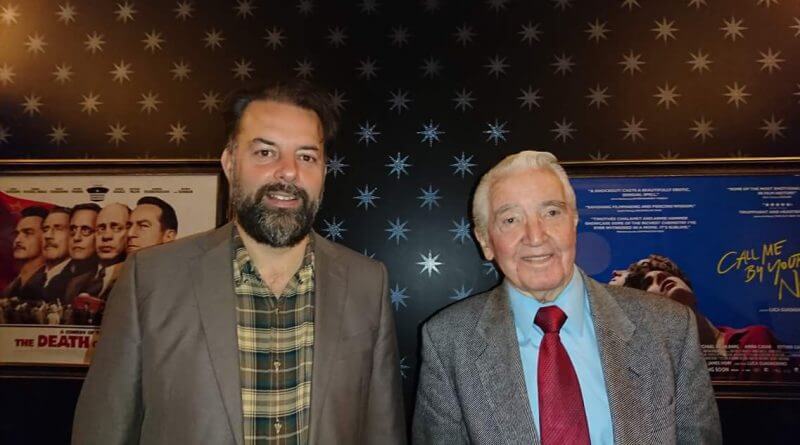 The Beast Comes to Belper.

Sunday saw a living legend in Belper, when ‘the Beast of Bolsover’ came to Belper Ritz cinema to do an on stage interview, and to introduce the new film all about him – ‘The Nature of the Beast.’

The event was organised for Dementia charity ‘Making space Derbyshire’  by David Marley from Derbyshire life and Erik O’Connor from Nicholson Payroll solutions, with help from myself.

Dennis Skinner welcomed all the 99 attendees with a handshake, a chat and a signature, before they took their seats. A superb photographic portrait of Dennis, taken by Sarah Marley, was used as a background to the event on the big screen.

I gave a warm welcome to all and then Dennis was applauded to the stage.  Introducing him, I spoke to the audience about how his career had inspired me to get into politics and how the local Belper and Duffield Labour Party now has over 600 members and registered supporters. Labour Candidates for Belper in next Mays local elections, Carol Anghared (Belper South) and Fay Atkinson (Belper East) also greeted the audience.

Afterwards I explained that in two years on the council, I had not heard incumbent Conservative for Belper East Martin Tomlinson speak in full council even once – ‘Must be playing Candy Crush!’ Shouted Dennis, to howls of laughter (a reference to Amber Valley MP Nigel Mills being caught out playing the popular game in a house of Commons committee meeting).

The tone was set – 85 year old Dennis had a twinkle in his eye as for an hour he recalled growing up in poverty, leaving his scholarship to go down the mines, how he became politically active and his time in parliament – and finally how singing to his late mother when she was under the worst grips of dementia, gave her fleeting fun and life. You could hear a pin drop as he sang a moving rendition of a song his mother used to sing to him.

A free raffle saw a signed copy of Dennis’s Autobiography ‘Sailing close to the wind’ won by a delighted audience member, and then a check was presented to Luiza Kelinska of ‘Making space Derbyshire’  for £509.13 – all the profits from the event.

All too soon Dennis had to leave, as he always sets of to Westminster on a Sunday evening – he left the auditorium to rapturous applause.

The audience then settled down for a screening of the wonderful film ‘The nature of the Beast’ – for the 400 people not lucky enough to get tickets, a DVD is on sale at https://www.dennisskinnerfilm.co.uk/

It was four hours of unforgettable and thought provoking entertainment.