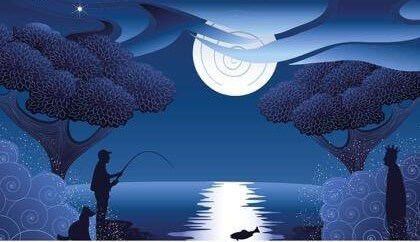 The Strutt Centre is actually a marvellous space for performance and is constructed differently for every play.  Tonight we were in the splash zone, as some of the seats were reserved for cast members.

The plays are, as in the folk tradition, tied together by folk songs, performed by Sue MacFarlane and Sarah Barley-McMullen, who are hypnotically beautiful together.

Set dressing is incorporated into the play, and the fluidity of  it signals the amount of attention that has gone in to stage management and performance construction. The mixture of accents is noticably varied, indicating the broadness in the origins of the folk myths used.

Seeing a man playing a Brummie dog (Toby and the Wolf) near enough made my year; the joy of that will not wear off for a while, and herein lies the crux of this performance – it’s delightful and will make you happy.  It seems like chaos at points but the chaos is organised, and a lot of humour relies on it.  You feel like you have just walked into a busy and interesting home.

The Fish Prince shows imaginative execution to great storytelling effect, and even more strongly moved the audience inside the story.  The storyteller for this tale was an impressive young man with exceptional composure and presence.

Bluebeard, despite being incredibly close to Angela Carter’s horrific interpretation of Beauty and the Beast in The Bloody Chamber, was more Panto than Play.  This one was performed more awkwardly and had less polish to it. It was also slightly blighted by a child in the audience who spoke constantly and was more audible during this tale.

The Man Who Would Cheat Death is an excellent depiction of how rubbish people can be with death and plays on all the petty utterances that grate in such times. Some very Dickensian performances occured here.

The Emperor’s New Clothes I recognised within seconds and spent quite a lot of time wondering if the Emperor would actually go nude. Ironically that child that wouldn’t be quiet exactly mirrored the child from this tale and was calling out his own innocent yet wise observations before we got to that part of the story.  Aesthetically, the simple costuming (no not THAT simple) of this tale was the most striking, being a uniform of red with black bowler hats. This tale was a lot of fun,  It ended with the palace staff dragging the audience up to dance with them, which made my introvert daughter and my introvert self refuse to make eye contact in a desperate “if I can’t see them then they can’t see me” self-deceit which unexpectedly worked.  The down side of this tale was white middle class women rapping, which is as bad as it sounds.  Luckily the two women playing the spinners were funny and polished and there were plenty of contemporary political jabs from them and other characters to amuse and satisfy.

None of the plays were updated in setting or time; they were all in their original plots.  The updating was all in references and jokes. And that worked.  There’s no way you won’t enjoy these five plays, which have a running time of 2.5 hours.