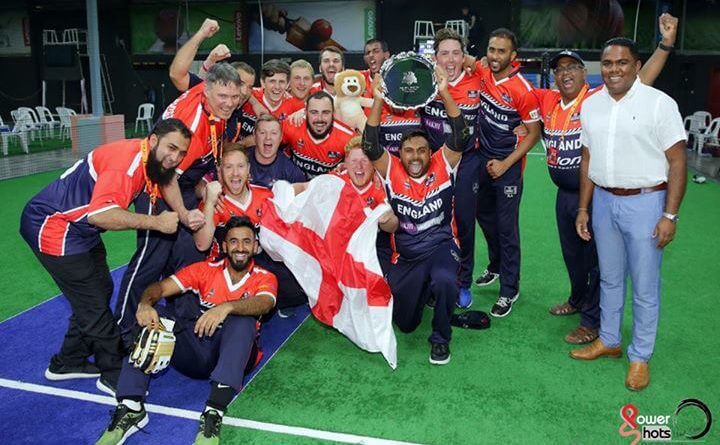 Belper’s Thomas Roe has helped England’s indoor cricket team to come home with its first ever trophy from a tournament held abroad.

Roe was vice-captain of the 13-man squad which won the World Cup’s plate after beating India in the final. Australia won the overall competition.

The English team finished the tournament in Dubai strongly after a sticky start in which it narrowly lost three matches.

Roe said: “At one point it looked as if we would come up with nothing after we lost our first three matches by a total of just ten runs.

“We finished seventh out of nine teams in the original tournament and were very disappointed, but four teams then competed for the plate. We started by beating Singapore and then a strong UAE team who had been playing well and, finally, India.”

“The Indians had between 80 and 100 fans supporting them among 200 watching and I have never played in front of such a large and raucous crowd. It was very nerve-wracking.

“Nevertheless, we chased down their total with two balls to spare.”

The Duffield cricket club player is from Belper and said he was surprised by the levels of professionalism at the World Cup of the indoor game which is very much the Cinderella form of cricket.

Thomas said: “We had a sports psychologist who gave us a real insight on how we should handle our opponents. It was well out of my comfort zone and a real eye-opener but I thoroughly enjoyed it.”

He added: “Playing in The World Cup was an unforgettable, once-in-a-lifetime achievement.

“Without Chevin Fleet Solutions support I would not have been able to go. I was massively appreciative that a local company should give me this help.

“I hope winning the plate is a reward for the company and, in particular, to managing director Ashley Sowerby who has shown such faith in me.”

The Indoor Cricket World Cup is the leading international championship of both men’s and women’s Indoor Cricket. The event is organised by the sport’s governing body, the World Indoor Cricket Federation (WICF) and is held every two or three years.