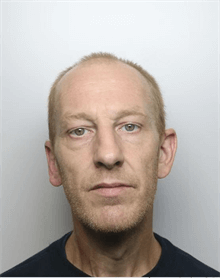 A man has been jailed for more than three years for breaking into a house, two cars and stealing a bicycle from outside a shop in Belper.

Lee Billyeald, 44, formerly of Marston Close, Belper, pleaded guilty to the offences which mostly all took place during August this year.

He was convicted of stealing the bicycle of a 13 year old boy from outside a shop on Gregory’s Way, Belper on Wednesday, May 10.

On Tuesday, August 1 he broke in to two cars in the Belper area, and he was also convicted of breaking in to a house on Nottingham Road, Belper at around 3.30 pm on Wednesday, August 2.

Mr Billyeald was arrested on Wednesday, August 9 and subsequently charged. He was remanded into custody and appeared before magistrates in Derby for an initial hearing the following day.

The case was passed to Nottingham Crown Court, and on Thursday, September 7 he was sentenced to a total of 40 months in prison.

Inspector Dave Parker, of the Amber Valley Local Policing Unit, said: “Petty criminals such as Billyeald cause misery and upset to the local community and we are pleased with the result as it will put a stop to his offending for some time.

“I also hope the sentence will act as a warning to anyone looking to commit crime in the Amber Valley that their behaviour will not be tolerated, and that we will take action to bring offenders to justice.”